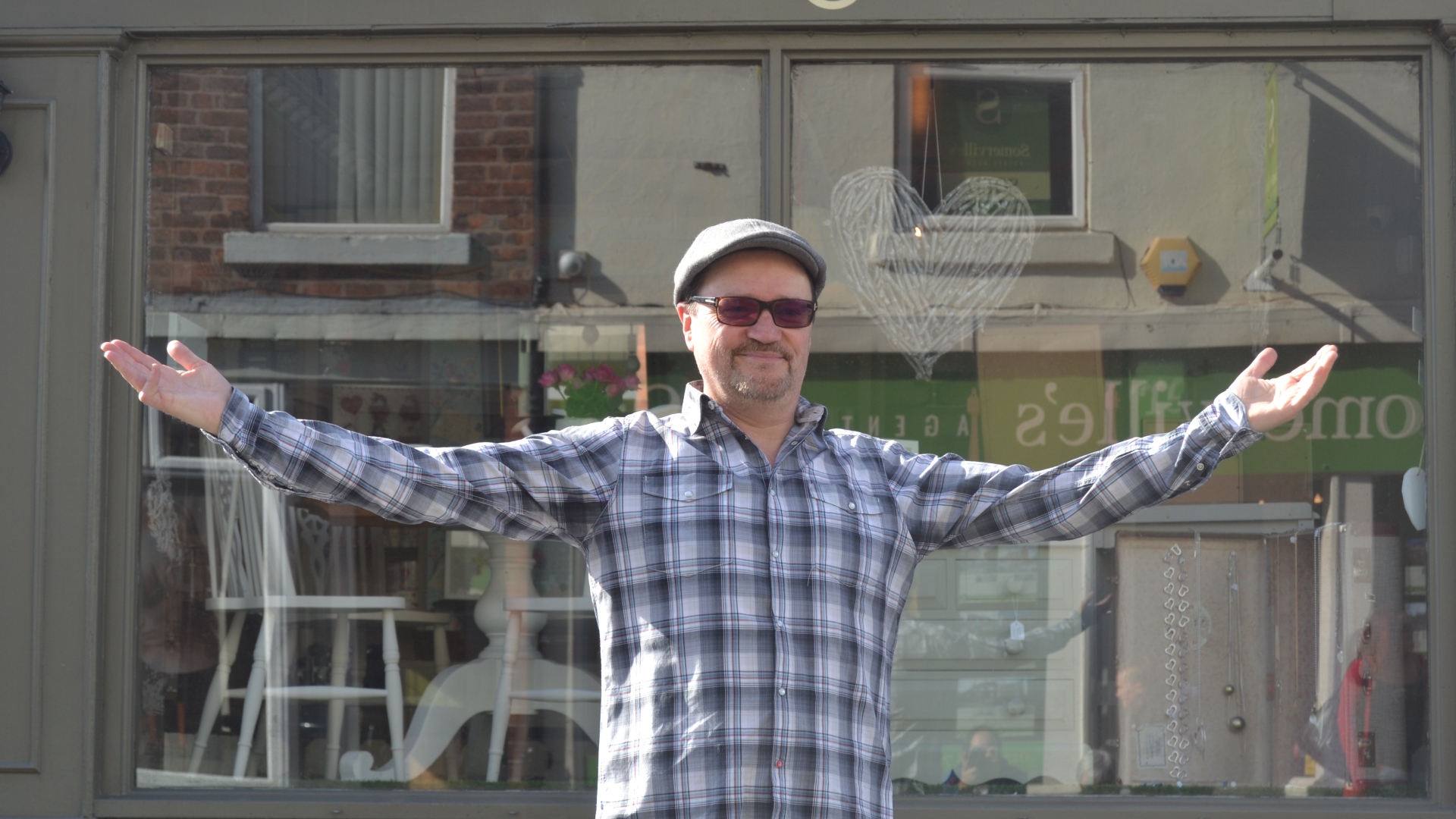 The actor Ian Puleston- Davies, known to millions as Owen from Coronation St (as well as Alan Partridge’s teacher nemesis and many other roles)  took part in a promotional photo shoot on Friday morning to promote the Great British High street awards. The Google backed scheme seeks to celebrate the diversity and community spirit of streets across the country, with a cash prize for the winner of “best high street”.

Ian,  has been a Hoole resident for many years and was full of praise for the area saying, “I wouldnt move anywhere else!” He posed outside a number of businesses in Hoole including the Little Yellow pig cafe, Mr Fruity , The Hollows and Deli Vert.

“I’m here because I’m backing the Great British High street award. Hoole to win.. Im smitten with the village. I love the fact you can walk down the high street and wave and smile. I think that’s what we all adhere to, thats what we all dream of . Its a community feel at the end of the day. The first house I moved to in Hoole, the previous owner said to me “when you move, you won’t ever leave Hoole, you’ll move around the corner!”

Ian said “I left Coronation Street about four months ago. I’m now doing a “Game of Thrones” type drama called Beowulf, up in Newcastle. I’ve basically swapped my high vis and hard hat for a horse, a sword and a vert long wig! I’m in the middle of doing Lewis at the moment, so I’m pretty busy.”

Linda Hobbs who works in Quality Cleaners said that the awards were first bought to her attention by Darren Lea of The Faulkner pub. Darren had been wondering if there was any recognition for Hoole’s community spirit as shown by events such as the Christmas light switch on and the Hoole BBQ, as well as the lottery funding awarded to the community centre.  “A couple of google searches later he stumbled upon the Great British High street awards and he promptly contacted NottingHoole” Sue Mason, of @Notting Hoole soon contacted another popular community figure Mark Williams, “and we spearheaded a campaign to get everyone involved & were overwhelmed with the response”. There has been a big campaign from the businesses sending  pics and support for the bid across social media. “It’s been a real joy getting the business owners to come up with creative ways to display the #GBHighSt signs.” Linda and Sue and the rest of the team are looking forward to hearing from people about why they love Hoole.

You can find out more about the high street award at http://thegreatbritishhighstreet.co.uk/high-street-of-the-year-award

One Reply to “Championing Hoole with Ian Puleston-Davies”