“What are the headphones for? ” I asked my colleague.

“They’re for guiding you around the park!” She replied . I was a bit surprised, having not read any of the pre show publicity and was expecting  a return to the circular wooden environment I’d enjoyed a few weeks ago at Romeo and Juliet. It had been a long day at work and I was unprepared “Me too, I’ve got a bloody great bag to carry round!” said my friend. And soon we were outside the tent doing star jumps and saying hello to strangers, a step outside the comfort zone for me personally, usually hiding in plain sight.  Messages conveyed to us via the headphones directed us to the first scene of the play. 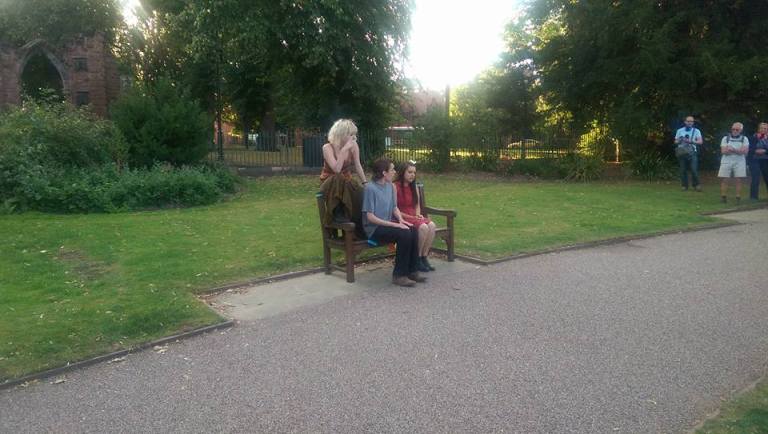 Opening up with an awkward teenage romantic meeting, featuring two actors representing the inner voices of the potential couple perched on a park bench, it was a fun opener. The open air setting was innovative and surprising, complimented by the usual sounds of the city, Church bells, sirens and traffic. Featuring an ice cream and facts about poison acorns and ending with the line “shall we just start again?”, I was soon intrigued by the whole premise.

The second scene featured some officials , a council consultation and some protesters ( all current buzz words in Chester)  emerging zombie like from the bushes. The guitar playing added to the otherworldly atmosphere, echoing the superb music of the senior cast’s performances. A confused runner passing the scene became caught up in the drama as the cast moved onto the next part. Despite the episodic nature of the performances, it never felt disjointed, each part was like a different scene in a dream.

Moving on the next scene, passing a girl sleeping in the bushes, and the walkways of the park lined with tags- responses from the public to the question “what makes you whole?”. The park was decorated with mini art installations, from placards for the protesters to decorations on the trees. The scene took place in the old quarry area and lacked meaning for me , but the dialogue was pretty with lines like “If I could talk to the weather I’d fall in love with the rain”.. People can take their own meaning from it.

Some pop culture references followed in the next scene, with a Cilla Black song and the audience , walking through a sparkling archway, encouraged to view themselves as contestants on Stars in their eyes (original, not the Harry Hill remake)…

Next up was 2 of the young actors debating the nature of existence via the metaphor of a mountain of rotting banana skins… What are the limits of life and is there any meaning to it all? Some deep questions presented in an engaging manner, complete with the comedy banana eating talents of actor Mia Norton.. ” more people live, and then they die.. more people live and then they die…” These lines felt right for a park, where the circle of life and the seasons, even the fading of the daylight was clear to see.

More light hearted was the  next part featuring forest/park dwellers, IT workers and a dash of unrequited love. The actor (name unknown) who “looked like Shakespeare” in a zebra skin jacket was the comedic highlight.

The next part was my favourite, 2 scenes going on at the same time with the audience free to move around and choose which to watch, with the noise of each respective performance serving as the background noise of the other. Plenty of internet talk and acronyms , LOL, ROFL etc made up the dialogue. “I’ll follow you… Retweet!”.. Do things like that even mean anything? For me it struck a deep thoughtful chord in my soul… what does identity mean in the social media age? Once again a complex issue was presented in an accessible way… “with no direction… you can only follow”. Maybe best to not ponder TOO deeply??

Gathering around a tree the audience were asked to remove an envelope and read out the answer to the question “what makes you whole?” These answers ranged from The Lord of the Rings: The Two Towers, roast dinners, Easter.. singing.. and cheerleading.. One more scene before we entered the arena, its meaning largely eluding me, despite the strong performances. A face behind the wall and a girl  in a bin .. before the theatre opened and everyone shuffled in , anxious slow steps through the gates of Heaven.

A musical performance ended the night , as bubbles filled the arena and drifted off into the sky. The cast sang the Atomic Kitten “whole again” tying the strands of the separate stories together. It was pretty joyous and once more warmed the heart of the cynical old twitter addict .

The cast applauded the departing audience…and we all returned to the real world. I wasn’t sure what all of it had meant, and it was nothing like I expected, but there was a real magical feel  to this memorable  open air performance. Full credit to all of the actors and the writing/production team.. Confidence in the work of Chester Performs and the future of talent in the borough.

What makes you whole?

One Reply to ““What the walls saw” review”