Chester Aid to the homeless (CATH) is  the key city centre charity for homeless people. I attended the open day at the Harold Tomlins day centre  and chatted to some of the staff about the valuable work being done. 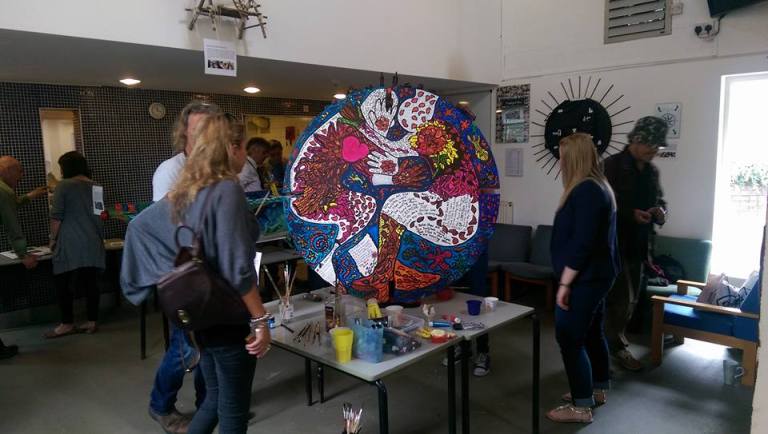 Manager of the centre, Rob, greeting visitors, described the admissions process: ” We find out as much as we can about them initially because there’s no point taking someone in and not getting to do stuff about their own situation…Most people are local.” He dismissed the idea that people from outside of Chester were coming into the borough to use the services.

He showed us around the main contact area, and the small kitchen .. “Because we are a much smaller organisation now , we are only available Monday to Friday 9-11 (open session) , community work and activity sessions then run until 1.30. I still support people after that time, I’m on call 24 hours a day , we support 19 people directly in 4 different properties..”

The tour included the “surgery under the stairs” run by  St Werburgh’s surgery  and also supported by a psychiatric nurse. “Not everyone we support is homeless, some of the people are vulnerably accommodated or just need extra support to maintain their accommodation”

He showed us the well stocked clothes area, the counselling room as well as the computer suite upstairs. CATH provide the practical help with shelter, shower use, laundry combined with welfare advice and support including first aid, food hygiene and computer access. For the homeless having a “care of” address is very important, and also having an email address is very beneficial in dealing with various agencies. Through job searches and applications, CATH can assess the numeracy and literacy of clients.  Changes to the benefit system can be confusing, and in the lack of face to face contact with agencies in the internet age, the centre seeks to increase understanding. The various activities for clients, including those that attend from Richmond court are aimed at providing some constructive use for time. ” I think I’d go a little bit insane if I didn’t have a job to do.. didn’t have that structure” Rob said.

He commented that “legal highs have changed the game”. He feels that the police need powers to deal with anti social behaviour, but  “the idea of fining someone for rough sleeping is not the problem.. The problem is how did they get there.” In his 15 years experience he says that sometimes people  slip through the net and experience problems, via stressful life situations like moving house or going into hospital ..” I don’t blame people for going up to the brink” due to  loneliness or lack of support.

John, the centre’s Education Office spoke about the recent art project. CATH have focussed massively on art therapy, providing structure and activity alongside the basic day accommodation. Of all the projects and courses offered, the art project has been the most accessible and successful.

He spoke about the Let it Bee project that took place in Grosvenor Park in May which was very well attended thanks to the open air environment. CATH are frequently involved in the wider community , with events like this and the annual sleep out event.

Of homelessness in general he feels that “the way we are looking at it, it’s a displaced class, building up over decades” due to the decline of manufacturing industries and estates built with insufficient infrastructure.”  Legal highs are a big problem in Chester he says. They have added to the crisis, they are “even worse than drink” . There have been no studies on the effects of legal highs on the body and with their synthetic nature, no one knows what the problems will be.  He has seen people in a coma like state after taking the drugs, which can be bought in several city centre locations. “The reaction is very much like taking heroin”. Many addicts turn to crime to fund their addiction, with John saying he had heard of one person spending up to £200 a day on the drugs, trapped in a  vicious cycle of crime and drug abuse.

John explained that the art project was influenced by the similarities between the Aboriginal people of Australia and homeless people in the UK, with both facing the problems of poverty and displacement. They start with a basic idea or a concept “and then its about working with other people to get the model together.. and then its about decision-making”. He sees this as a metaphor for any life process, taking in collaboration and problem solving. Looking around at the various paintings and sculptures, it was clear to see the project had been a success. However he said that progress and rehabilitation could be a frustrating process: “We don’t see that progress, people want outcomes.. you can get outcomes on an A level course” but not always in real life. Media coverage often focused on short-term publicity to secure funding  with CATH receive only a small grant of around  £1500 a year from the council…There is more awareness of homelessness now in Chester, “but also a distance.. They don’t know the stories behind these people”

Here clients created the image of a homeless person, “devoid of identity, gender and race” inspired by the volcanic ash figures left behind in Pompei.

The CATH bath, centrepiece of the display:

This started off with the concept of homeless people having no privacy. The design, very much influenced by the summer of love, featuring stuck on gold coins and a bar of Imperial leather soup representing “decadence”, and painted cling film for water, also expressing  the themes of security and personal space.

As well as the day centre, CATH have a small accommodation project in a building near to Cwac HQ,  and house and support those with a history of homelessness. With the bulk of homeless provision now moved out of the city to the controversial Richmond Court in Boughton ( political issues for another time and not the remit of this blog ) I salute the work of the staff and volunteers. Team member Kate Northcott summed up the open day best of all : “If your motivations are right , and your intentions are good you’ll rise to the top. CATH is the cream”

You can read the story of volunteer Annie Buckland here: https://shitchester.wordpress.com/2014/10/20/the-annie-buckland-story/

Thanks to all the staff at CATH @CATHsupport