A full house enjoyed the latest family pantomime at the Forum studio theatre, proving that you don’t need to travel to Liverpool or Manchester to see fading soap stars to have a good time at Christmas. Tip Top productions have been keeping the flag flying for live theatre in Chester for many years, and based upon the joy and fun emanating from this show it is easy to see why.

After a slow start introducing a “Cross channel Fairy” and a vermin infestation led by King Rat, the familiar panto catchphrases that we all know and love were soon in evidence. Opening musical number “One Fine day” had this reviewer’s  foot tapping with its sunny melancholy, performed by Jade Pritchard as Alice , and the chorus.

Comedy sidekick Jack, played by Taran Knight is another early highlight, showing great rapport with the audience, before the entrance of Dick him/herself played with effortless brilliance by Eliza Hewitt Jones. The highlight for me was Sarah the Cook, who debuts in an outlandishly brilliant British bake off based costume, who stole every double entendre packed scene. Her outfits get better and better including one themed around a supermarket loyalty card.  “Have you seen Dick Sarah?” asks hipster Captain Fitzwarren who completes the cast alongside an acrobatic cat who communicates only in varying “meaows”.

The music was the highlight for me with fun interpretations of “Up town funk” and Taylor Swift’s “Shake it off” with each of the cast singing a line in turn. There is also a clever mash up of “Halo” and “walking on sunshine” before events take a darker turn as King Rat manipulates events with his magical tail. Look out for the clever fast forward/rewind scene , which must have taken a lot of rehearsal time.

Dick ends up being  dismissed, but having only been recruited the day before is probably exempt from many worker’s rights. Without access to a tribunal, he needs a boost from the Fairy to end the act on a hopeful note.

The jokes continue to flow in the second half, with subtle fun poked at Cheshire Oaks, Ellesmere Port, Wrexham and even Rosies. Sarah the cook has a wonderful sequence involving a borrowed shopping trolley full of giant confectionery items.. Look out also for a memorable slapstick ballet sequence.

The ending may be bit rushed , and  the evil King Rat  seemed to have little to do except be booed and has minimal interaction with the cast until the final act. The deus ex machina ending of magic and a member of the audience saving the day can’t really disappoint when the show is as fun as it was. The closing musical medley as Dick sets off to become Lord Mayor is packed with joyful and uplifting pop music. 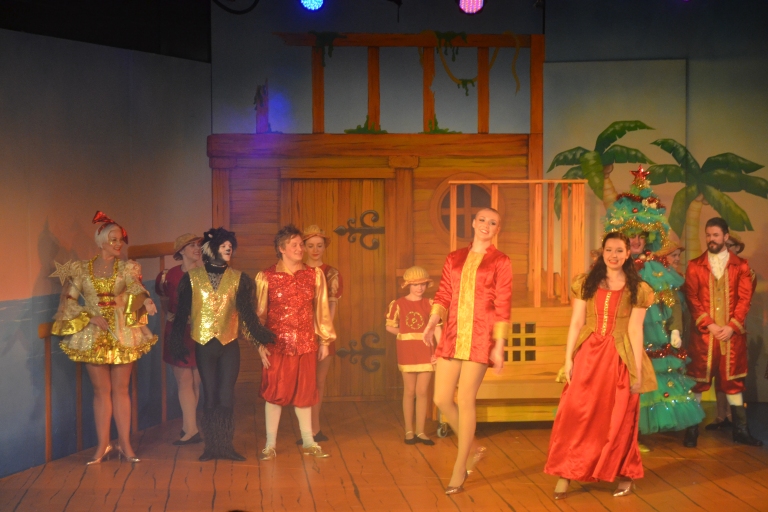 Dick Whittington, written by Peter Swingler and directed by Steve Davies, is fun for all the family and another hit for Tip Top Productions. When Jack brought 5 young members of the audience onto the stage and asks what their favourite part was, three of them replied shyly “All of it”…. Leave your worries behind , for a bit, and enjoy this one !