A tired and grumpy SC had a drink with previous blog star and well known local character , Liz…

My name is Elizabeth Reid and I live in Chester. Have I had a good year? I suppose compared to other people yes its been sensational. I don’t live in poverty, I have a roof over my head and I have some good friends. But above all else, my greatest friend is my sister, and my animals. By quirk of fate I have been born in this country, and lived a long time, to enjoy the fruits of capitalism.

What’s happened to you this year?

New cafes, we’ve got Ginger… Waitrose of course, especially when you get a free coffee. Very pleasant staff..They treat you like royalty.  I think its marvellous that we have a Labour council, good crowd, like them all. Can’t fault them. Chris Matheson, Matt Bryan, Sandra Dixon…

Do you mean Samantha ?

Samantha is it yes.. Can’t fault them. I think they’re more compassionate than the last council… I have had occasion to ring up the Conservative office in Nicholas street and was met with rebuttal and rudeness. It was regarding fracking actually, it is a big issue for me.

Fracking is appalling, the double standards of this government. All of the countries of the world are saying we must cut our CO2 emissions, and here we are in this country, fracking to kingdom come. We’ll frack this little island to death..

Hand in hand we’ll make a stand, our lock on points are fully manned

climate change all the while/ Upton camp resists in style

Are you critical of the Police ?

Do you see the police as your enemy? There has been a lot of anti police sentiment. the guy dressed as a pig for example?

Well I dont really agree with that . They are doing their job by the government….

Tripods, towers, tunnels, yurts, Upton hits them where it hurts / Locks and chains and liquid soil. bailiffs blood is going to boil….

We have nuclear waste, nuclear fuel, Hinkley point going to be built by the Chinese… its just laughable. We don’t want them. I appeal to our dear leader that you better get your facts right and stop telling other people to reduce their CO2 emissions.. Its a short term answer to a very massive problem, we’re doomed basically.  Its countdown to Armageddon. 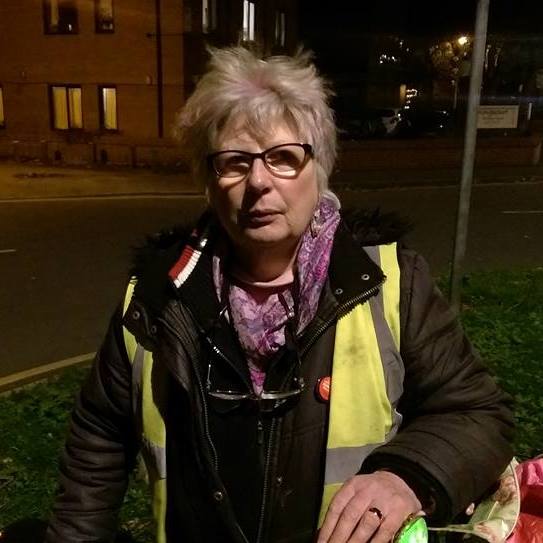 How long have we got ?

Not long.. I’ve been around for a very long time and I’ve seen nature cracking up. We’ve hoisted our own petard, we wanted capitalism and materialism and its a metaphor for the unspeakable, which is DEATH.

Have you enjoyed any of the Christmas parades?

Yes I did, I saw one.. It was wonderful. I was schlepping along Watergate st and coming along was an angel giant, it was white and silvery, and all these schoolchildren with lanterns. It was beautiful.

Do you think theres hope in the children?

Id like to think so. I have grandchildren , so I hope so. Unless we can get something done…   Wood is rotting, drinking water is unbelievable.
Do you have any evidence to back this up?

Yes I have. I was choking to death on it with the chlorine. All the drugs.. hormones Its all in the water. It cant be screened out. My water seven years ago was beautiful. As for fracking… I had a word with an Algerian taxi driver and he said they’ve all voted together to say no to fracking. NO, no , no , no , no. I feel like the camp is my home. I feel like I’m contributing something, they are a wonderful bunch of people, with hearts and minds and beautiful souls.

Tell us about your Christmas so far, with events in Chester and the Christmas market..

I would say its Schlock. I dont really do Christmas. I find it a hedonistic , a bit like Donal Trump’s wig.. Trash! I give my fuel payment to charity…The Department of Work and Pensions will not take it back. No presents, I give to animal charities and the homeless. I’m very keen on Oxfam and The Red Cross,  I am a devotee of charity shops, and bins.

I cant cope with it myself. All those people running around like headless chickens, buying. And it’ll all be thrown away later. And then the bin men will have 60 x the work they usually have to do . It’ll all end up on landfll, surprised we haven’t blown ourselves up with all the methane from those landfill sites.

The new theatre is opening in a years time. You said you’d never live to see it happen. (See https://shitchester.wordpress.com/2014/06/18/i-think-its-better-than-a-lot-of-places-we-could-be-in-the-potteries-a-chat-with-liz/  June 2014)

I never thought I’d see it. Its wonderful, we need some culture. Shrewsbury have a beautiful theatre… mega stars going there !

What mega stars have you seen in Shrewsbury ?

I haven’t actually. But I know all about it. I’d love to see Carmen, they do operas well. We could have a lovely opera house here. I dont want to go in churches I want a proper opera house. .

Not what I mean !  Its a beautiful theatre, we have opera. We need it badly. I’ve not been to the panto, its lovely for kiddiwinks but I’m not 12.

Years ago I was a CND activist. I was a Beatnik still at school. I was appalled by nuclear power.. I thought “I never want to see a man again, I never want to have sex,.. I certainly dont want children because this genie is out of the bottle”  How can I bring forth life with this vile abomination. Oppenheimer said “Oh my God what have I done!” I never wanted to have sex.. I hate that word, shall we say “commerce”?

Commercial activity hahah. I can’t do this, I cant have children.. But I did. I’m glad I did. It was the greatest thing. It all went out the window, once you have mortal combat. The outcome is glorious. We have creation and destruction in one… I’m radiating myself as we speak, we have radon gas, which is a natural gas coming from rocks. Urenco , up the road, its appalling. They should have come up with something else by now.

What can Chester do better ?

We could have more street cleaners for a start ! The filth is everywhere. I get the feeling, people think everything is going to the dogs so why bother. Dog fouling, soiled nappies, urination you name it. In Switzerland you wont see a butt on the street, you are shot on the spot, metaphorically if you drop litter. Horrible ugly buildings, all around us… It was a nice little town now theres a square inch of it that’s acceptable. Brutalism… Filthy canals… and too many supermarkets, get rid of them. Lets have small shops…

You go right to the top, and theres only one way and its down. These supermarkets have had their day!  They have ramraided their way into people’s minds. Its a load of crap.

Tell me about the Mill Hotel incident ?

The Mill Hotel is near to me. My friend was having a birthday party there, I thought I’d better go there in disguise as I’m not very popular there. I put a beautiful jewellery encrusted headscarf on , and dark glasses. I made my way into the restaurant They didn’t know who I was.  The person I had been trying to avoid was sitting there, himself… Eye contact .. and my cover was blown. I love dressing up and I love mimicry ! I’d love to be undercover…

How do you think the interviews gone?

The interviewer has said its not as funny as last time! We’re talking about serious issues here… I cant be funny when I’m talking about serious issues. There are some quaint wonderful characters in this town that have me on the floor. Theres a man called Skippy, the man that says “haven’t I seen you on Flog it…?” , but Skippy has me on the floor, not with him of course. There was that guy in the Roy Lung shop, with that joke about Bond!

On death row for a minor offence ?

No its a metaphor.. They keep on adjourning his sentence. Its like living with a sword of Damocles above his head. I have to take my sister with me after the accident at Crewe station when I was visiting another prison. I was crushed by a virgin train and catapulted onto the platform, unconscious. everyone was staring at me because I had pink hair.