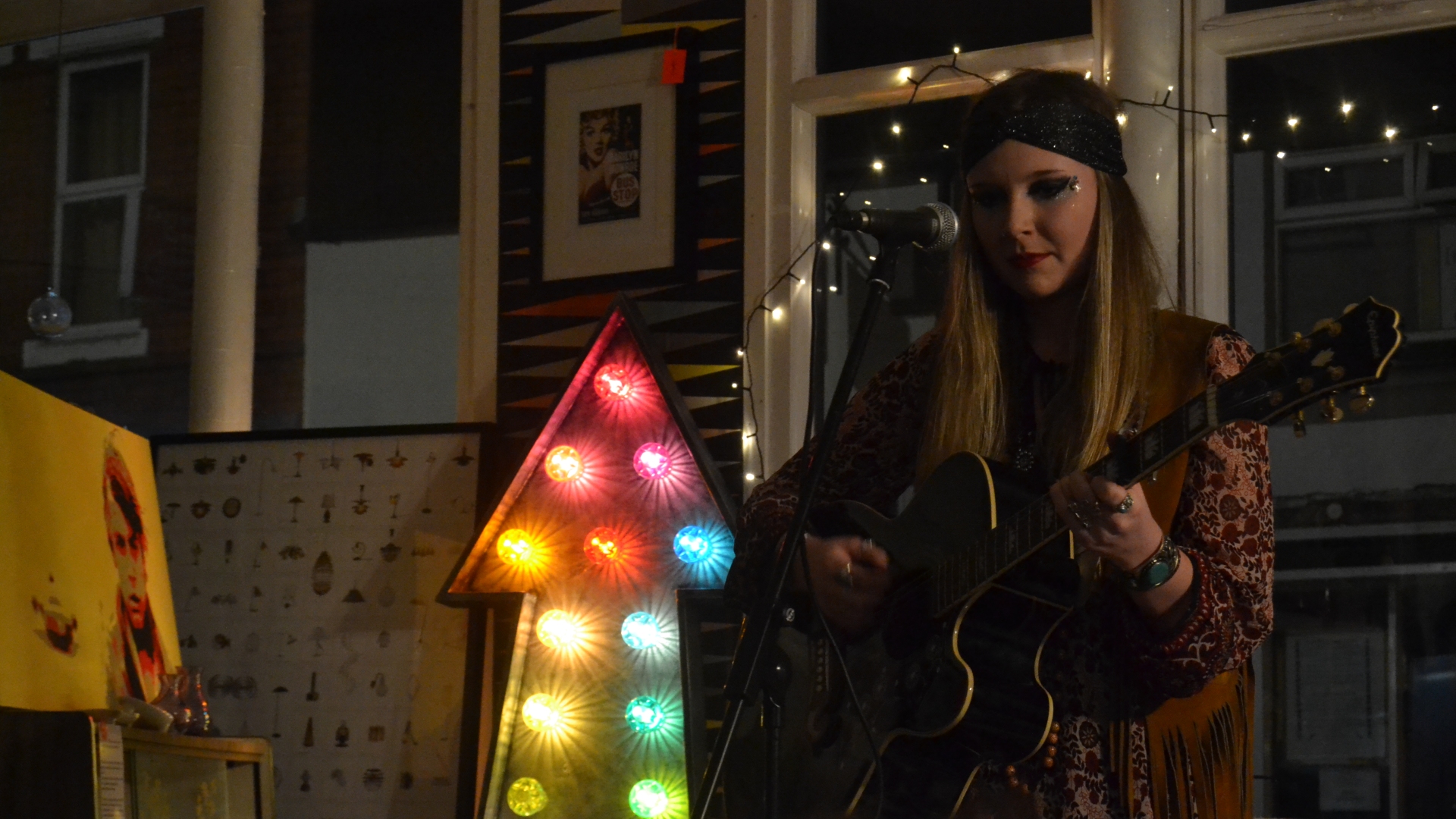 January ended on a high as we attended the debut of Sofar Sounds in Chester.  A  Crowd of over 40 people crammed expectantly into Becnicks, as puzzled Brook st pedestrians glared through the windows with interest,  “I don’t know what to expect, its all up in the air” commented fellow observer Ben Hultum, reporting for musical blog Schotts list.

The concept for Sofar sounds is all follows. The location of each pop up gig is kept secret until a few days before the event. Interest is registered by the website and guests are only told on arrival which local acts will be performing. Organiser David Weir had told me that the plan was to hold the event once a month “at random spaces around Chester”. Sofar Sounds is well established, as Lisa of the Manchester group explained to the crowd. In 2009 a group of musicians were fed up of distracted audiences, talking and using their phones, and not concentrating on the music .So they decided to invite audiences into their living rooms. The idea was a massive success and events now take place in over 200 cities worldwide. “No one knows who is going to play” she said, and in the past big names like Hozier and Bastille have taken part.

Anna Houghton was the first act of the evening.    The singer songwriter  entertained the crowd with tales of sadness and wintery angst. “All I can hear is falling trees” she proclaimed, with the compact environment adding to the intensity of the songs and the performance. Ending with the fragile “Child”, it was a sobering start to the show

Second up was the equally intense and heartbroken Alx Green. His unusual way of holding and playing his guitar added interest to the bleak “Hollow”. A well known figure on the open mic scene, Alx also offered a flash of hope with his passionate closing song.

“Would you like my scarf to sit on?” asked one guest during the short interval. This was typical of the relaxed feeling of the night, and the friendliness of the crowd and venue. Becnicks had put in a huge effort to prepare for the secret show and had been a lot of DIY in the shop over the weekend. As we sipped wine from plastic cups,  the more upbeat Peaness offered a change of emotional pace.  The anthemic “Summer song” was the highlight of the show for me.

Campfire social closed the show in their usual style. Minus drummer Andy, Alx Green stepped in to replace him, again playing percussion via his guitar. It was a laid back performance from the band, leaving all the monsters behind, shielding themselves from the rain and bringing the night to a soothing close.

Sofar Sounds are looking for host venues in Chester for their monthly gigs.  The first one was a big success, with the feel of an intimate musical “lap dance.”  It achieved its goal in making the audience focus on the music, but must have been a challenge for the acts , looking each and every one of us in the eyes. The success of future events could only be limited by the volume of acts able to perform and the supply of quirky venues.
The turnout was great and this was a cool way to spend a Sunday evening. Chester needs more things like this!
Thanks to the organisers and artists that performed
@ShitChester

One Reply to “Sofar Sounds”