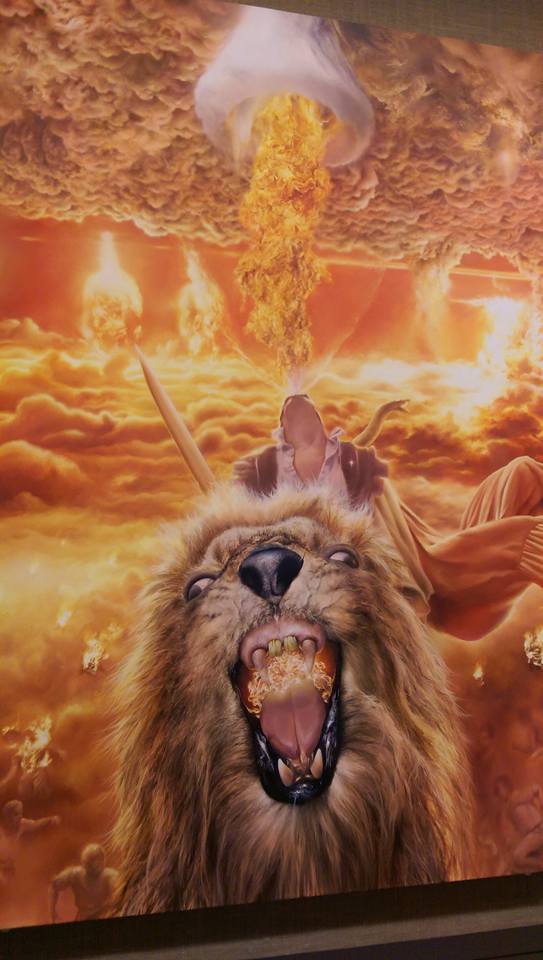 We visited the Grosvenor Museum to see the exhibition by Chester-based artist Marcus Usherwood.  ‘Revelation: The Art of Marcus Usherwood’ is running until 17 April. The artist was born in London in 1965 and now lives in Chester. He has been exhibiting for 20 years, but  this is his first solo museum exhibition.

Opening the exhibition is a depiction of the creation of the universe entitled “Event Horizon”.  The artist explains that his faith is “in Yahweh, the Hebrew name for the God of Israel in the Old Testament, and in his Son Yeshua, the Hebrew name for Jesus, which means ‘God Saves’. I am a member of Father’s House Sabbath Congregation, a body of believers dedicated to living for Yahweh the God of Abraham, Isaac and Jacob. ” All of the paintings depict episodes in the history of Yahweh’s interaction with humanity, from the creation to the end of the world.

The vibrant paintings are both disturbing and thought provoking. The depiction of the Garden of Eden with an anguished Eve watched over by a hooded Vader-esque snake is particularly striking.  Christ impaled and surrounded by a weeping crowd is another provocative piece of art.  Marcus uses water-based acrylic paint,  acrylic ink, and oil paint, occasionally mixed with turpentine, applied with brushes and sponges.

“I want my images to appear convincingly tactile, and use the malleable properties of oil and acrylic as a vehicle to give the appearance of reality.  Through many trials over the years I have sought the ability to create worlds so real that the viewer feels they could step into the painting. 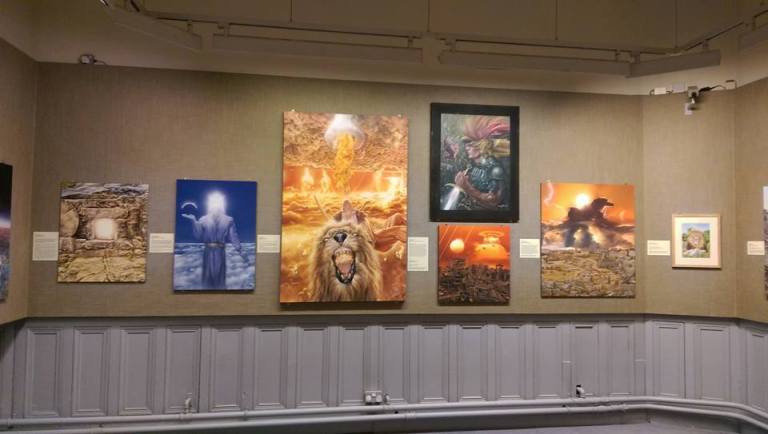 The images depicting Armageddon were the highlight for a doom-monger like myself. The four horsemen of the apocalypse riding upon dog like beasts, reminiscent of something from Masters of the Universe,  across a sky of blazing fire, as death and destruction falls down upon the world.   The blast of fire about to emerge from the mouth of the beast seems to leap from the canvas. This is a striking piece of art and is worth the (free) admission cost on its own.

Moving on, another painting draws an eerie parallel to a biblical prophecy regarding the city of Damascus and the Syrian civil war. One more  vision of the End shows an ominous cloud looming over an unsuspecting city.

Regular cultural commenter Councillor Louise Gittin said: “Marcus Usherwood’s remarkable paintings range from apocalyptic visions of roaring flames and billowing smoke to serene images of stillness and peace.  I am sure that our visitors will be excited and moved by his astonishing work.” I agree, well worth championing.

If you’d like to ride with the 4 Horsemen the museum is open:

One Reply to “Art of destruction…”