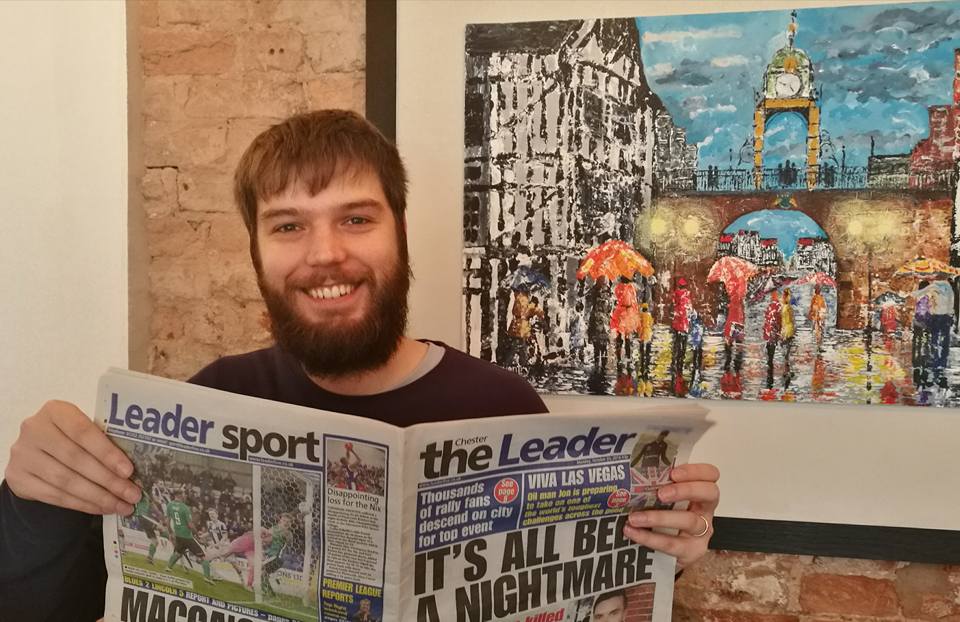 Neil Bellis is senior reporter for the Chester Standard and is also a Director at Chester FC. He also runs a Chester fanzine “The Blue and White” with his twin brother Richard. He is not related to Bellis brothers’  of garden centre fame  or Dave Bellis  from the carpet clearance centre. . Neil says that he uses no specific “beard product” apart from soap.

Neil was studying Biomedical  sciences at Cardiff Uni.”I absolutely hated it!” he says. He started writing about sport and was nominated for a Guardian writing award. He studied a Masters at Cardiff uni and found that he enjoyed news reporting. In 2013 he got the job as reporter with the Standard, his first job in journalism.

“Its always been more focused online. The challenge for journalism is to make that pay. We have a good business model with The Standard because we give a lot of papers out for free, which means our advertising revenue will always stay the same, with 60,000 copies going out each week. I think we do a good job considering. I don’t want to slag off the Chronicle but we’re better than them! We try and avoid click bait stories.” he says.

The Standards online presence is lesser than the Chronicle’s with its epic facebook comment debates. “We’re getting better. We are a small newspaper group whereas the Chronicle is part of Trinity Mirror, and they have a really good template. We are going through an update soon.

” I think its an incredibly exciting time. I’m from Chester and I can’t think of a period in the city where we have had so much go forward. I have had a detailed look at the Northgate plans and if it goes ahead it will be great. We have the theatre, which people still moan about , at least they’re trying something. People are so attached to the past of the city that sometimes they can’t see that to progress the city we have to do something! The city centre is beautiful and some of the things that have happened in the past have been awful. The market hall, it’s a travesty, demolishing Roman baths for the Grosvenor centre, puncturing a massive hole through the city walls for a ring road. One good thing about the 60’s is that people tried to do something to make the city better. They got a lot wrong but at least they tried stuff. We need the 60s mindset of development with the modern caution from the local population.

On the Dee House row

“The thing that annoyed me about the amphitheatre stuff, was that the campaign wasn’t based on reality. It is technically possible to dig up the rest of the amphitheatre, but its so incredibly unlikely and we’d have to go to Court… its wasting taxpayers money on a vanity project.  Adam Dandy does genuinely care about the city, you can see with the Share Shop. But its not possible. Its practically impossible in planning terms, English Heritage hold all the cards and they have said they don’t want to demolish Dee House. We’d have to take them to court, its just not going to happen. As much as people hate it, I’d prefer the council to do something.. they tried to do a visitor centre in 2008/9 and couldn’t get the funding. To find private investment into a dilapidated building is a miracle.”

Neil has been a board member for 2 years.  He is currently Director of Communications, and is responsible for media strategy.  He is working on a new website in partnership with MBNA.” I am sorting out our radio and TV coverage for next season (Blues player). I also do a lot of work with Supporters Direct, who support fan owned clubs.” Last year he lobbied Parliament for tax breaks for supporter owned clubs.

“When we reformed in 2010/11 I was at uni. I helped out where I could, we started the fanzine in the second year of the club Raised £2500 for the club over the last  years and was the only non league fanzine to be nominated for “fanzine of the year”.

“One thing that has been a mild annoyance to me is that people judge how well the club is run by its on field performances. I think its unfair. There has been some bad decisions made by the board but generally its pretty stable and solid. The day to day running is done by the elected board. Anyone can join and vote. Any major decisions we bring back to the owners. We have monthly meetings and you can ask the board whatever you want. If you think the pies are terrible you can come and tell us!”

“The whole ethos is sustainability. With private ownership things can go badly wrong. Chester City was badly run for about 20 years. Football clubs are resilient but some clubs go under like we did. If you have a sustainable business model you’re not wasting money when you get it.  We have a good manager in John McCarthy and he’s done well so far. You can pick up points, maybe enough to get in the play offs . But we have to be realistic in terms of money so we have to look at other sources of income .That could be developing our own players through the youth system, Sam Hughes is doing fantastically well at the moment, and we have signed 2 players on last year due to a sponsorship deal with Swetenhams chemists.  We have a community focus and sometimes that can translate onto the pitch. In 120 years of private ownership the club never managed to get its own training ground. We have some irons in the fire.. ” says Neil. “A community hub . We are looking at two sites at the moment, which could improve the quality of football in the city and help us get better players. With the trust model we are in it for the long term.

“Our community trust does some good work and we are expanding that , going to schools delivering proper sessions about coaching and healthy eating and so on. We’ve had a schools day with lots of kids down at the ground , with a parade at half time, that’s the way forward.   The growth of the women’s team is also highlighted by Neil. Top of the league in their second season, sponsored by MBNA.  We have an under 18’s team and we are also working closely with Cheshire FA to develop the sport.

“I think its insane. The argument from the police is that it makes easier for them and removes any disorder from the local community. There has been incidents in the grounds from home and away fans which have been incredibly unpleasant so you can see what they’re on about. The other aspect is having the bubble makes its a pressure cooker, but the last derby was terrible. I think you are getting the apathy now. Why should people who haven’t done anything wrong in their life have to put up with that level of police scrutiny and hassle. It’s a lot effort to control a handful of people who can’t handle their ale or think its funny to punch people”. I was on one of the buses last time and a fan blamed the directors . No one on the board wants it but we don’t get much choice when it comes to policing.  ” Neil says that news Police and Crime commissioner David Keane was initially supportive, asking Merseyside Police to observe the bubble policing and compare with their handling of Tranmere games. However Merseyside police concluded that the bubble was necessary.

“There hasn’t been any trouble for the last few games. If it was relaxed there would be concerns about trouble again. Neil hopes the bubble won’t last forever but says the clubs hands are tied. “If we say no to the police we pay a load more or don’t play the game, we would lose our safety certificate. ”

In 2017 Neil would like to see success on the field, as well as an improved matchday experience and new website.  He is looking forward to Storyhouse , the Northgate and the bus station. “I think we are developing in the right way and the city is improving…” he concludes.

One Reply to “All things Chester & Chester FC with Neil Bellis”