Originally scheduled for completion at the end of October, Cestrians will now have to wait a while longer for the Northgate wall to re open due to discovery of some exciting archaeological remains. Propped up with scaffolding for over 5 years due to structural surveys revealing that the foundations were unstable, the steps had become a running joke in Chester and were seen as a prime example of the lack of care towards the city’s heritage.

The latest repair work which began in April involved the controlled dismantling of the 19th century steps to allow more stable foundations to be built. During this process, a discovery of “national significance”  has been unearthed relating to the medieval and Roman gateways which once stood on the site.

The area of the North Gate has a complex history and archaeologically is a very sensitive location.  On the spot once stood a main gateway (Porta Decumana) to the Roman fortress.  The subsequent medieval North Gate also housed a gaol, but this was demolished in 1808 and replaced with the current neo-classical structure in the early 19th century. 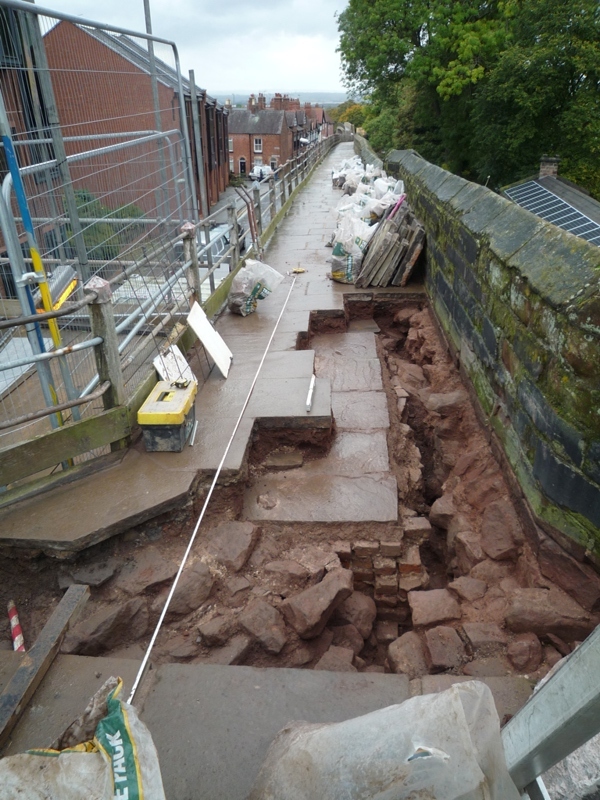 Archaeologists have discovered massive stone foundations, thought to represent the remains of a Roman gate tower – one of a pair – that once flanked the northern entrance to the Roman fortress.  There is also evidence to suggest that 1st-century AD timber gates and towers preceded the stone towers.

Evidence suggests that the Roman foundations that ran back at right angles from the current line of the city walls, were chopped through, recycled and incorporated into later fabric of the walls, possibly during the early 19th century.  However several courses of Roman gate tower masonry were left untouched, sealed beneath the current steps – until now.

Cllr Louise Gittins said that “Little is known about the four gates that were placed in each side of the Roman fortress, and any surviving evidence is considered vitally important for our understanding of this site.The foundations for the new steps will be designed to leave the important archaeological remains undisturbed.  Indeed, imaginative ways of displaying the Roman tower remains beneath the new structure are currently being explored.”

To the west of the steps a chamber, which was discovered within the wall, was also found to be all that remained of a pair of cottages built up against the inner face of the wall in the 18th century.

The dismantling work has revealed evidence that the section of wall may also be moving meaning that further investigation will now take place to determine how to secure and repair the historic monument.   All alterations and repair work at North Gate are being carried out under the guidance of Historic England. The timescale for the repairs has not been revealed but it is thought that the work may take several months.