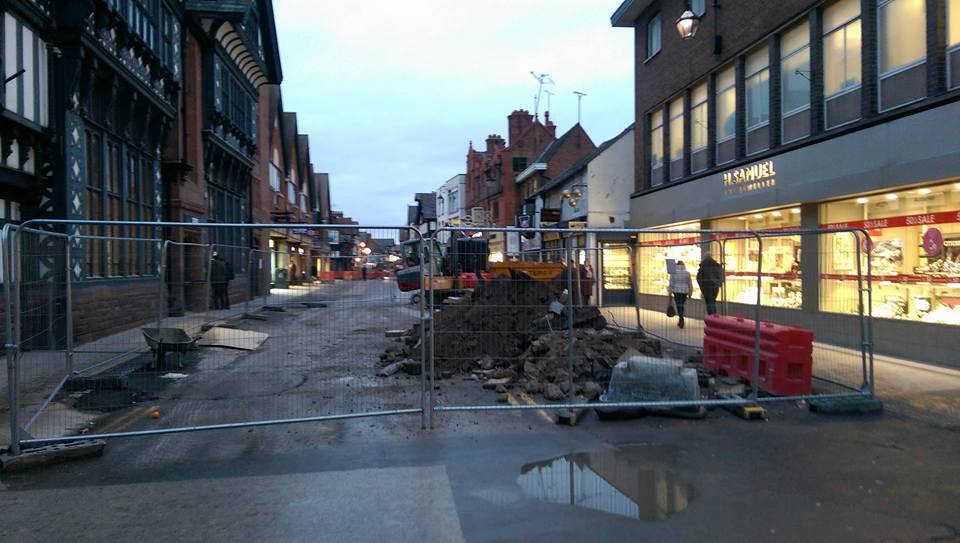 The public realm improvements to Frodsham street, first announced in May of last year are according to the council, moving into the “final stages”. The work which began in August of last year has been marred by delays and apparent long periods of inactivity. The delay and disruption has led to complaints from businesses on the street but hopefully the end is now in sight.

From Monday 23 January, Frodsham Street will be closed to traffic between the Claire House Hospice shop and the former Woolfies.  Access will be maintained up to the mini-roundabout near Iceland. While this road is closed access to Frodsham street and the Kaleyards car park will be via a diversion route using Northgate Street, St Werburgh Street, Eastgate Street and Foregate Street.

The exit to Kaleyards car park will also be closed while paving work is carried out.  Traffic leaving the car park will use the entrance near Poundland, then via Foregate Street.

Optimistic Councillor Karen Shore, Cabinet Member for Environment stated that “We anticipate the work will take around two weeks to complete around the car park exit and it will be re-opened as soon as work in this location is finished.

“Work has been delayed on Frodsham Street following supplier problems but we are confident that if things continue to run smoothly the improvements will be completed in early March.

“We’re working with businesses to help them co-ordinate their deliveries during the changes and would like to thank everyone for their support and patience with these improvements.”

Since work began last year the Council have provided semi regular updates at :

(www.cheshirewestandchester.gov.uk/frodshamstreet) . If completed on schedule the new look Frodsham street complete with street furniture should tie in with the launch of the Gorse stacks bus interchange.