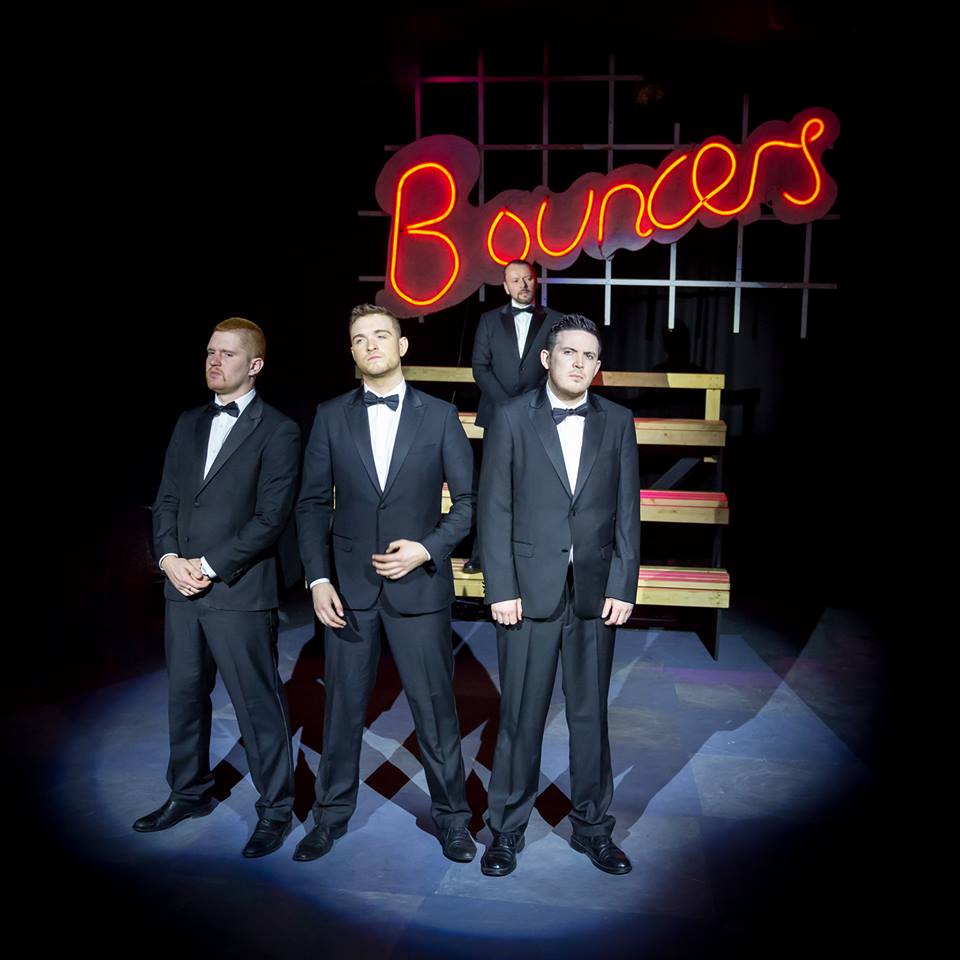 The ever popular Bouncers returns to the Forum studio theatre, having  been performed 7 times by Tip Top productions over the years, the last in 2013. Written by Yorkshire playwright John Godber, the work was first performed in 1977 but its depiction of the riotous excesses of nightclub culture have been a huge hit with audiences over the years with the play performed all over the country. Directed by Tip Top founder Peter Swingler OBE the latest version feels very familiar but is no less enjoyable.

Bouncers tells the tale of the a night out in a generic Northern town and the 4 members of the cast play all of the roles, often rapidly changing character and gender, from the titular bouncers to boozed up lads, to ladies looking for fun  on the dancefloor. The Bouncers make an early appearance as audiences are waiting in the foyer , mingling silently casting a disapproving eye over theatre goers. This adds an immersive effect to the evening and makes you feel part of the show even before its begun.

As the play unfolds we are shown the preparation for a night out from various characters, with a scene at the barbers, the conflicts between the bouncers themselves and their interactions with the nightclub patrons. The show includes dance and rap, with the excellent amateur cast switching from one character to the next in quick succession. The strength of the performances and the changes in the actors behaviour and body language makes it easy to follow what’s going on. Anyone who has ever been on a night out will recognise the universal nature of these characters.

Lead bouncer, the troubled and “Lucky Eric” played by electrical engineer Neil Mason anchors the play with a series of introspective speeches reflecting on the darker undercurrents of drinking 12 pints and a the lonely lives of the dark suited men on the doors. One of the speeches includes a depiction of sexual assault and subsequent violence and this a stark contrast to the light hearted hijinks of the rest of the show.  The show is a successful mix of contrasts from the pulsating music and neon lights to the darker internal lives of the characters. Despite these flashes of darkness the play is very funny throughout, including a clever reverse comedy porn scene and a slow motion fight, all leading up to a very memorable musical finale which delighted the audience.

Funny, moving and evergreen Bouncers gets a big thumbs up from us, especially if you haven’t seen it before