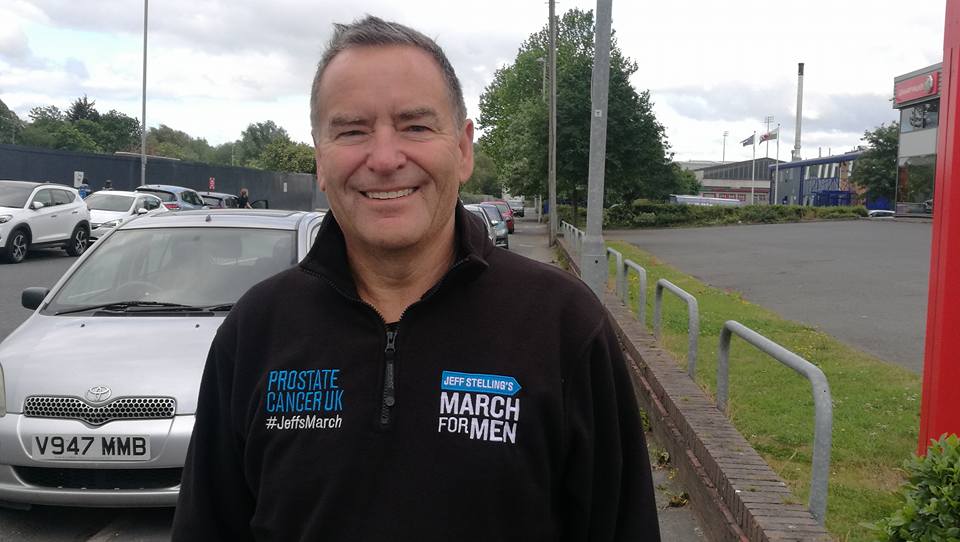 Sky Sports presenter and former countdown host Jeff Stelling set off from the Deva Stadium at 8am this morning on the 6th day of his quest to walk 15 marathons in 15 days in aid of Prostate cancer.   On the 6th day Jeff was joined by other charity walkers, including representatives from 18 football clubs, who set out to walk 25.8 miles from Chester to Goodison Park, via Prenton Park and Anfield.

Taking part was Handbridge resident Rob Jeffries who appeared on Dee106.3 earlier in the week to promote the cause. “I walked a few hundred miles in the training process, and  the main aim is to make sure we get awareness about prostate cancer out there. Go out and get yourself checked, go down the pub, chat about it with your friends.. ” So far Rob has raised over £900 (https://www.justgiving.com/fundraising/robjeffries) and the die hard Man United fan was wearing a vintage Liverpool shirt to boost his fundraising efforts.

Rob spoke to Mark Lawrenson who told us that having lost his sister to cancer he had previously taken part in the Newcastle half marathon to raise money. ” I’m hoping walking is better than running. Yesterday where I live in Southport you couldn’t have walked, it was an absolute monsoon so I’m looking forward to it!

“It’s such a good thing. I’ve been checked lately. When you get to a certain age, a bell rings and you think “maybe I should go and get checked” My mate has stage 3 prostate cancer and it looks like he’s going to beat it, the sooner you get to it, the better it is.”

Another walker, Kevin Webber was walking the whole 15 marathons:  “Two years ago I was diagnosed with terminal prostate cancer and given 2 years to live. I wanted to do my bit and try and raise some money so my kids didn’t have to worry about prostate cancer in the years to come.  This year I’m doing all 15, since I’ve been diagnosed I’ve raised 75 grand. It’s not a big charity but its the biggest male cancer, doing this is humbling and emotional . I well up a couple of times a day when I look at people and hear what they’ve done. They’ve lost their dads, their brothers.  Normally I run ultra marathons, I’ve never done more than 6 marathons on the trot, after today I might start to struggle but everything’s good! 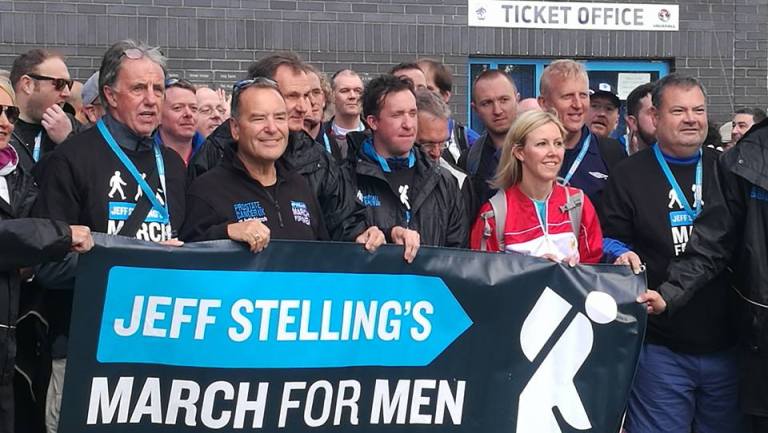 As the walkers set off, Jeff kindly agreed to an interview as we walked down Bumper’s Lane. We asked Jeff what inspired his amazing fundraising efforts:

“To be brutally honest at first I was just asked by somebody from Prostate cancer, but then when I started to do the walks, I realised a lot of people I know had prostate cancer. Everybody out there will know someone who has prostate cancer, in my case it was a couple of my colleagues at Sky. The statistics are scary, one man in eight in the UK. while we walk for 11 hours today, 11 men will die from prostate cancer. They’re scary statistics.”

“I have found it easier physically than last year, my body has held up a lot better. The rain over the last 2 days, it was the worst day.  The best part is, a moment ago we met a young boy came out to meet us, hugged me and gave me ten quid. That’s the kindness that we have seen all along the way. In the pouring rain yesterday a man dashed out of his house with a couple of boxes of chocolate fingers. People have been so supportive.  A lot of the soccer Saturday gang were here earlier in the week. Matt le Tissier came on one of the legs, comedian Mark Watson was with us yesterday down in Bristol. When we set off yesterday from Stoke, people from my era will remember the 1972  Stoke City league cup winning side, with the likes of Gordon Banks and Terry Conroy, and they were all there to see us off! We have brilliant support today from the likes of Kevin Ratcliffe, Robbie Fowler, my mates Tomo, Charlie Nicholas… Lawro, a lot of people forget was one of the original soccer Saturday gang.

“We have been through some beautiful areas, the Cotswolds was beautiful and the weather was fantastic. Just when it rains torrentially, you get your hood up and your eyes look towards your feet and you don’t see so much. Its great to be back in Chester because it’s one of my favourite cities. I used to come racing here which was always a fantastic day out and obviously I’ll be back here with Hartlepool! ”

We asked if the walk was a distraction from the woe of Hartlepool’s relegation:

“Well not really..  I get news every day and most of its news you don’t want to hear! Its a struggle to hold onto your best players when you go from the football league to the national league. You want to think we can bounce back because Bristol Rovers did it at the first attempt, and Cheltenham did it. But on the other hand I look at the likes of Tranmere, who had a brilliant season, fantastic points total and didn’t go up. Its a tough league, and I have absolutely no idea where we’ll cope with it or not! ”

You can sponsor Jeff at https://www.justgiving.com/campaigns/charity/prostatecancer/jeffsmarchformen