Virtual Reality Escapes, recently opened on Northgate street, allows you to leave Chester behind and take a walk on the moon, travel to Mars, fight marauding dinosaurs or blow the head off a zombie with a precision headshot. The state of the art facility inside a former chemists was set up by owner Matt Caplan who told us :

“We have set up a virtual reality centre to show people what virtual reality is offering at the moment. We have 6 market leading headsets, with 10- 15 video game/experiences for people to try”  We tried out several of the games from the child friendly Fruit Ninja to the aforementioned space experience where astronaut Buzz Aldrin guides you from the moon to Mars with insights into potential future space travel. Users will swiftly adjust to wearing the headsets  and the imagery and technology is sophisticated enough to fool our brain into accepting the virtual world, not least on the psychologically disturbing “walking the plank ” experience. In this experience, players walk across a plank that “extends” across an abyss from the top of a skyscraper.. despite the fact that in the real world you are safely on solid ground, the visuals drag you into another reality. Can ou jump from the plank? We couldn’t! 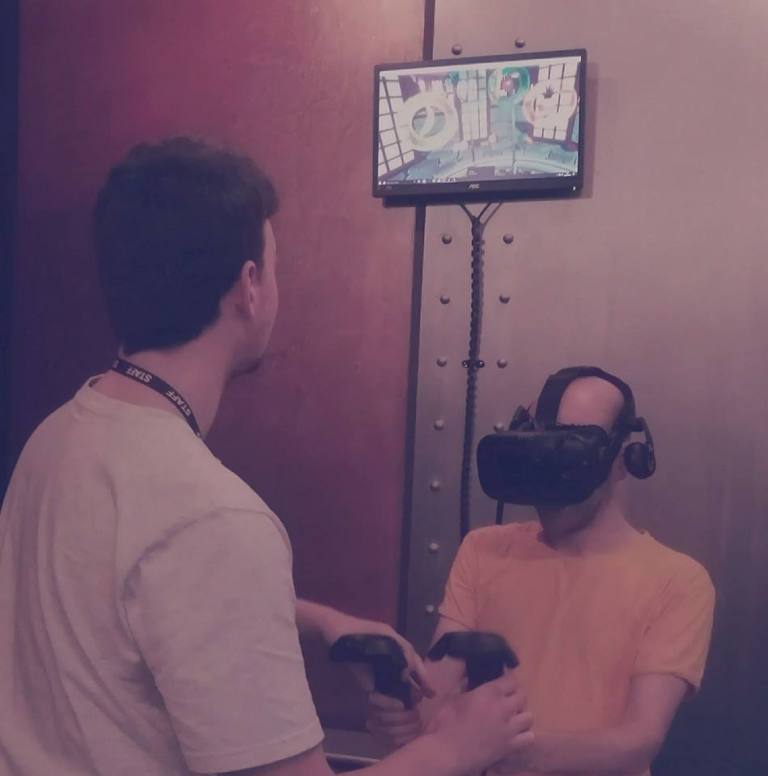 Explaining the technology, Matt told us that the HTC Vive headsets use ” an infra red camera  to map out the floorplan that you are then mapped onto, so any movement you make in the physical world is then translated into the game giving you this extra element of interactivity. The PlayStation VR doesn’t track you at all and the Oculus uses visual cameras rather than lasers . It gives you a brilliant universe.” He says the attraction has proven popular with students and hopes to link up with the university , in particular the geography department as footage filmed with drones can be played on the headsets, with the prospect of immersive seminars looking at active volcanoes and similar.

“I’ve always loved video games from an early age. The headset blew me away. There are big barriers to this, you need a big play space you need a very high tech computer. We charge a decent rate and anyone can try it out while the technology’s on its infancy. We aim to keep up with the technology when new headsets come out”

The highlight of our VR experience was a cooperative game of zombie themed Arizona Sunshine. Players fight off hordes of the undead across a range of locations, using real world motions to fire, reload their weapon and move across the play space. Players can also talk to each other as the zombie horde closes in.  For anyone that’s played a survival horror game , this is the next step up fully immersing you within the game and making your worries of high car parking charges, charity shops or delayed city centre developments float away as you focus on a careful headshot instant kill or run out of ammo and end up as a virtual corpse yourself.

VR Escapes is open 10 til 10, 7 days a week. For prices and booking details visit

One Reply to “Virtual Reality Escapes”