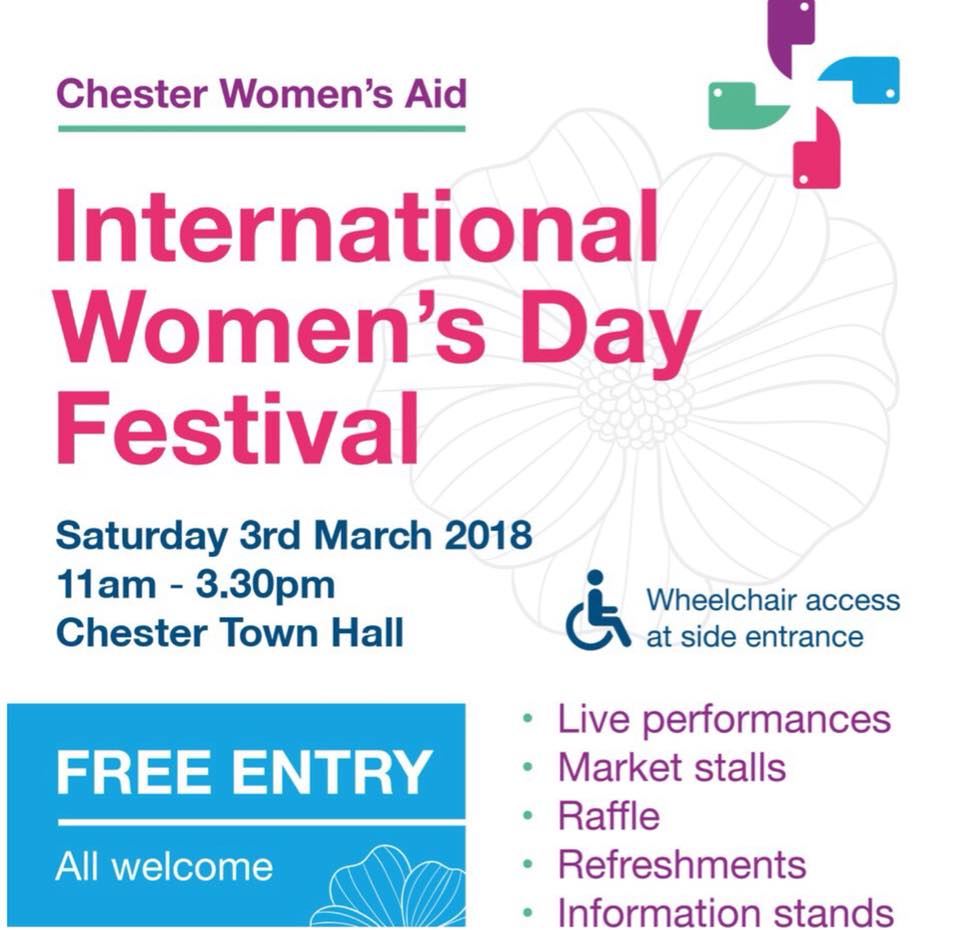 Chester Women’s Aid have been operating in Chester for over 30 years. They seek to raise awareness of domestic abuse and to raise funds for those escaping from abuse, mainly women and children.  This Saturday (3rd March) they are hosting an event at the town hall for International Women’s Day. We spoke to Angela, treasurer of the charity about what to expect at the event.

“Its one of our two main fundraising events in the year and also a chance for us to continue to raise awareness of domestic abuse and how people can get help” she says. There will be many other groups in attendance with activities and entertainment on Town Hall square and inside the Town Hall. The list of performers and charitable/artistic groups reads like a Who’s who of Chester. Karamba Samba will be starting off the event, and other performers include Bollwood dancing. ,the University of Chester cheerleaders , Chester Rock Choir, the Dee Sign choir, Pop Vox choir. Fusion singers , Fireflies community choir. “Our big guest speaker is Professor Emma Rees from the University of Chester ,  who be delivering her “Who Broke feminism” lecture at 1pm” . Two other notables on the bill are Fallen Angels and Minerva youth theatre.

This year there will also be workshops for women  who would like to get involved in government , run by the  Chester Soroptimists . “Also new this year Chester Cathedral has agreed to provide a “soothing space” for anyone who may feel triggered by what we discuss or display at the event can go to St Anselm’s Chapel by a private enterprise, they can talk to a trained listener.”  There will be a wide range of stalls inside the town hall including  Japanese handicraft, art groups, Chester Women’s Labour, Friends of Palestine, Allington Hughes, West Cheshire Multi cultural women’s group, Body Positive and CSASS.  Prizes on  offer in the raffle include donations from Flip Out Chester, the Grosvenor Hotel, The Cheese Shop and others, entrants can also win tea with the Lord Mayor.

Chester Women’s Aid support and work alongside a range of other organisations that provide refuges. For example the Women’s Housing Action group who run the refuge in Ellesmere port as well as  P3 and Cheshire West and Chester Family safety unit and others.

“We help people from all over Cheshire” says Angela.

“We are the ones that review the applications for the grants. We hear the stories of why people need this money when statutory services dont provide certain things. If you leave a situation and everything you own, you need clothes. You might need pots and pans, if you need school uniforms for your kids, or change your passport- all of these things are not covered by government benefits. We step in and provide small grants to help people get back on their feet.  ” CWA rely on donations and fundraising and have no paid staff

“We are always looking for new volunteers, people who want to attend our events and help and also people who’d be interested in joining our committee. ”

“The problem is huge. 1 in 4 women will experience some kind of abuse in their lifetime. That is ranging from physical violence, to financial abuse, coercive control, emotional abuse. It takes many different forms and creates a lot of other challenges and problems. Often domestic abuse can lead to fatalities – 2 women a week are killed every week in the UK.  In Chester and Cheshire people might think its a wealthy area.. its everywhere at every socio economic level. Its also prevalent in same sex relationships, Men suffer a high proportion of domestic abuse but because of societal conditioning about men speaking about their feelings, they may not get recognised or supported. We have helped several men.

“Domestic abuse affects so many people that even if you haven’t been in that situation yourself you’re highly likely to know someone who has .  If anyone is in a situation of domestic violence and is looking for help- we don’t provide that directly but our website has several links to organisations that can help as well as the National Domestic Violence Helpline number –0808 2000 247”

International Women’s Day is on Saturday 3rd March from 11 til 330 at the Town Hall.