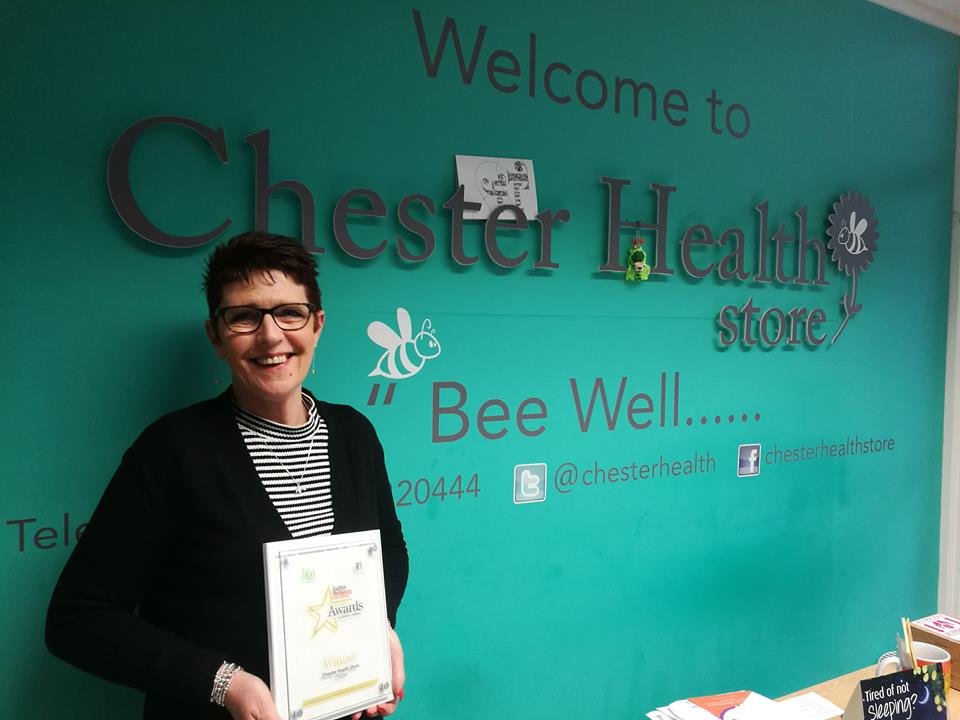 Chester Health Store on Bridge street row has been awarded a prestigious award for Best Health Store from Better Retailing Magazine.  The Better Retailing Magazine Awards are run in conjunction with the Health Food Institute and Chester Health’s victory was based on a secret shopping visit with the business rated on first impressions,  store layout, personal attention, check out and overall impression.  One secret shopper who visited Chester Health described the store as “small but well presented” saying that they were “impressed with the friendliness and knowledge of the store’s owner.

“I’m somewhat gobsmacked!” said owner Niki Davies who opened the business in 2014. Previously she had a shop in Heswall but says that the move to Chester was the “best move ever. I just love the city!” Niki has been working in the natural health sector for 25 years, rising from administration for a chain of local health stores to manager, and then opening her own business. “I just love what I do” says Niki “I am a rubbish businesswoman but I love helping people. I’d rather they went away with nothing than a product I didn’t believe would help them. This shop has been open over three and a half years and its only in the last couple of months I’ve taken any kind of wage from it.”

Chester Health Store is based in a building which dates back to 1660 and has an upstairs room used by therapists and workshops. Niki is also a keen user of social media and regularly updates her facebook twitter and Instagram pages. The store is also known for its eye catching window displays, the current one features a cannabis leaf to promote the sale of Cannabidoil.  Niki has risen above her anxiety to build and grow her business says that “at first we thought it was a wind up! My mum died last summer and things have been tough for me, so this is an incredibly well timed boost”