First on the list was Burlingtons, tucked away on Northgate row next to Rosies nightclubs upper level. I must have walked past the cafe hundreds of times over the years but have never been in. It was a pleasant start to the day’s cafe crawl.  The service is friendly and welcoming and there a pair of elderly gents are chatting in the corner about the big issues of the day. “Does your sister still visit at the weekend?” and “will we go to war with Russia.. we didn’t over the Crimea…”… “It’ll all be done by robots soon….. the so called special relationship”. 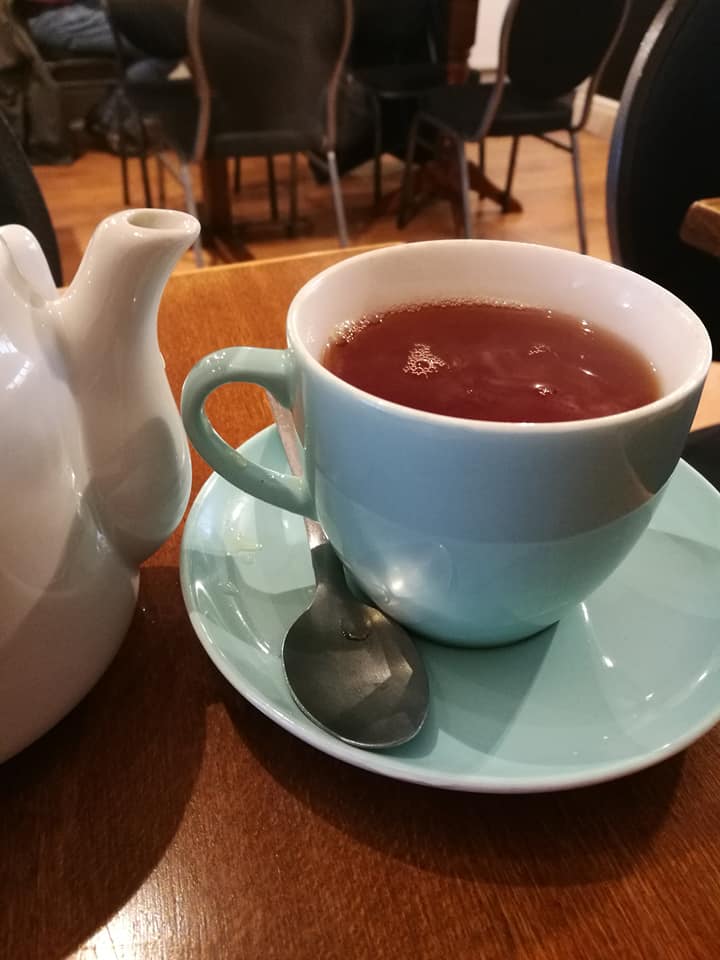 The breakfast is cooked quickly and, although not artisan, very reasonable for £5.95, a high eating quality. The proprietor chats to a regular customer about new stalls in the market, including an artisan bread vendor. Both compare the developing set up to Altrincham market.  “They have one central seating area used by all the businesses” they comment favourably.

Burlingtons also has seating on the row which would be great for sitting out in the summer, watching a parade or hiding from someone.  I leave to go and listen to the busker I can hear at the Cross.

Its still early morning and the city is quiet. The lone busker’s melancholy songs match my mood . “It was the first time .. that I saw you” he sings, the mood heavy with a dull longing.  Next he sings of “drowning in chains” and that theme takes me down Watergate street which has taken a battering in recent months with multiple shop closures. The pre Christmas street festival was a big hit and the existing traders are working hard to improve the street, but it feels desolate at this time of the morning. The row from The Vic is mainly empty, the opening of an artisan wood craft Rustic Element, unnoticed and unadvertised by anyone. Glancing down a side street I see the back of the old Forum and wonder how different it will look if/when the Northgate development happens.  Down Crook street I also spot an artisan stationary shop, before the abysmal locked up Guild Hall. They used to dance lessons in there.. and there was a small museum. The street is a patchwork of hopes and dreams. Bring back Weinholts!

I walk down towards the racecourse, the now boarded up El Sotano, a reminder of the city’s transience. The Contemporary Gallery has also ceased trading.. but the Roomz hotel, funnily enough has not become “student digs”  even though Leroy from Hoole said it would on the Chronicle facebook page.  The Watergate Inn has now gone and all that remains is a pile of bricks ready to be cleared for the new racecourse entrance. I never went in when it was open and will not miss it. I know that to many it will be another sign of the city’s plight.. but how many people actually used it. Clinging to an idealised past again. What use is an empty pub to anyone? 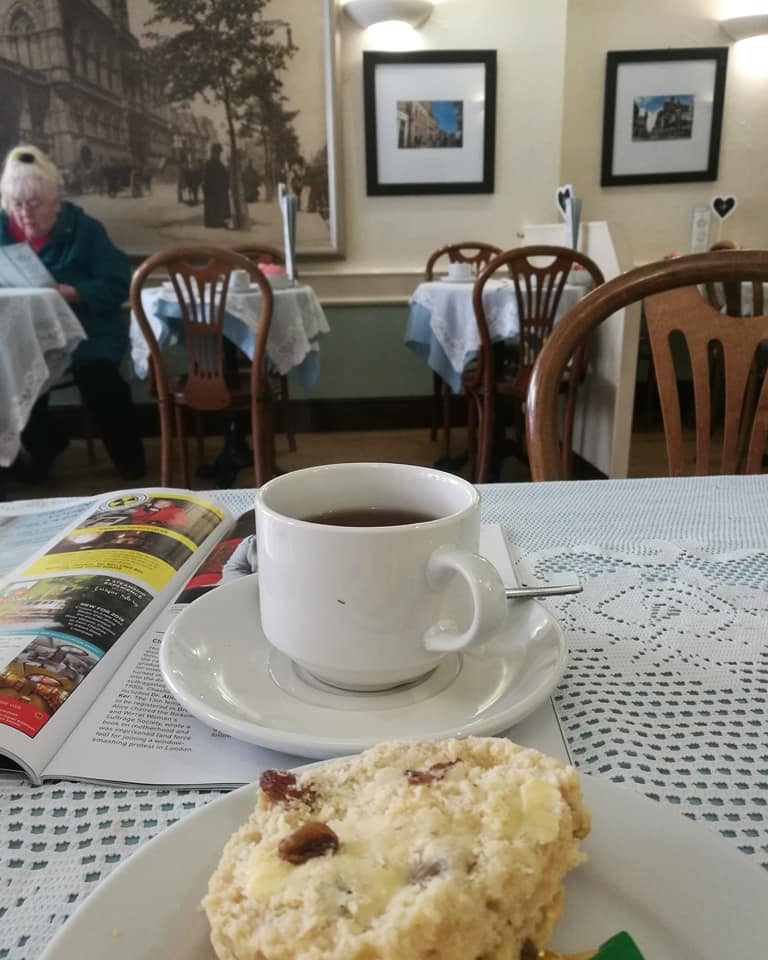 The sun is bright as I head up Nuns Road past Cwac HQ and towards my next stop on Bridge street, Coffee Mill. Despite living in Chester for over 35 years I have never been inside and once again I am pleasantly surprised. Described as “traditional” and “family run” the cafe is initially quiet but soon a large party of senior citizens enter and fill most of the tables. As I sip my second caffeinated beverage of the day, I stare at the empty seat opposite me and wonder what horrors and joys their eyes have seen.

The cafe itself is great, with wow, tablecloths, you won’t get them in a Costa, and large sepia tinted photographs of olde world Chester. All that’s missing is a portrait of the Queen on the wall and some 50s rock and roll on a jukebox.  Its the sort of place you can imagine John Prescott romanced Pauline in.. in the 60s ..and its cool.  If you squint through the windows and imagine, really hard , the ultimate proper shop “Owen Owen” might still be open, if the bright “CLOSING DOWN” signs of bankrupt clothing retailer EAST weren’t so visible. Reading an article about 1000 years of Cheshire feminism in spring Chester “ultimate guide” I namedrop to myself,  the political leaders mentioned on the list whom I know.

The crowd of seniors contently sup their drinks, one examining the menu with an illuminated magnifier. Obviously they have travelled so theres still enough charm in the city to attract visitor despite what you may read online. All we need is for residents to stop running the city down and support the place rather than fleeing to Broughton or Cheshire Oaks at every opportunity. I asked for jam for the scone, but didn’t get it. I don’t mind as the service was great.

On the way to the next port of call, I pass a group watching the newly installed CGI flythrough of the Northgate development. They aren’t happy with it. “There’ll be one to shop in there.. its already 59 million in debt..” Another one comments that we “don’t need any more shops”. I still want to believe in it.. as a regular wanderer of the backstreets, there are parts of the Northgate area that are hideous and won’t be missed by anyone. If it doesn’t happen this time, will we be stuck with the ageing market and the Forum for ever? A restroom break reveals most of the toilets in the market are out of use. Grim. The Romans probably had better facilities.

New artisan(again) baker/real food vendor Crustum in the market is the third venue on the crawl. Joined by a co crawler for the first time, we both enjoyed the relaxed industrial feel of the new business. My coffee is very strong and my colleague enjoys a pork soup “They’ve even used chestnut mushrooms instead of the cheap ones” he comments.  An apron and oven gloves hang from a pair of antlers mounted on the wall summing up the quirkiness of the venue. An adjacent unit makes up further seating for Crustum and an elderly lady sits on her own eating some toast. Some more customers arrive and others stop to admire the bread and make a purchase. Its all positive, this along with the pizza place will hopefully bring new footfall and life into the market. Welcome.

Coffee: it was about 2 pounds

Last venue of the day is the Cathedral refectory, recently refurbished, so technically, at a push another first time.  The server has a space age red strip of lighting and is an improvement on the old set up. Prices and service great and the place is also busy. A large group next to me compare notes on the best hoover to buy. The light streams through the windows, its one of the nicest places in Chester. All that’s missing is some Gregorian monk chanting.  I spend a few minutes walking around the main Cathedral, despite being a strong atheist the beauty of the building always wows me. I try and take a photo of the stained glass window but my cell phones not up to it, and I wish I was a professional photographer. For two seconds.

Heading home towards the world class bus station, another busker plays in the porch of the hopefully soon to be renovated former Yates’ building. As predicted online commenters are already claiming it will become student housing and that bringing life to a derelict structure will somehow doom the city. Chester has become a parody of itself I think to myself. You strive for balance but the city is always on the edge of either death from a crazed bus driver or a vague destruction.  I block an agitator on “Chester’s Biggest community notice board” for their  repeated claims that the Disney Shop and WHSmiths are both being turned into student accommodation. I hide in a charity shop from another social media frenemy.

5 Replies to “@Shitchester’s day off”