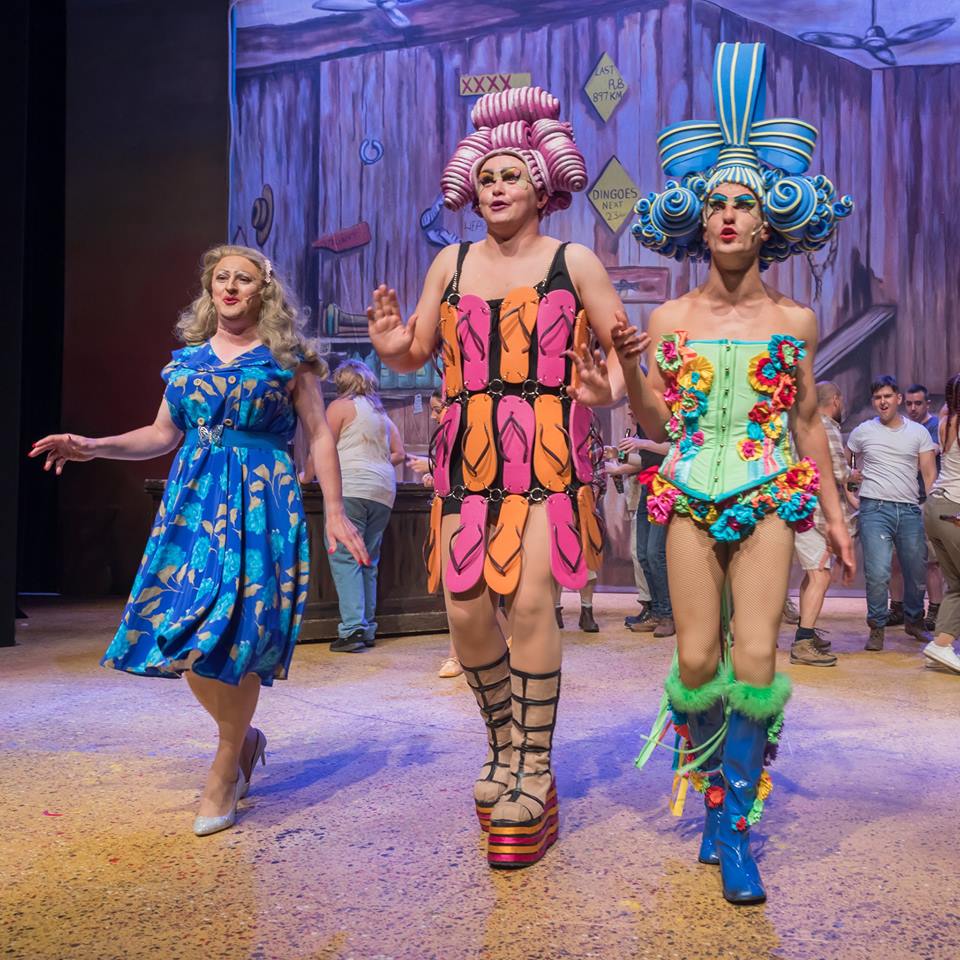 Showing at Theatre Clywd until Saturday, Priscilla Queen of the Desert is the latest show from Tip Top Productions. The fun musical with a soundtrack packed with dance floor classics is based on the Oscar winning film and is guaranteed to have you clapping along, or at least tapping your foot from its opening scenes.  Telling the tale of three drag queens journeying through the Australian desert in Priscilla (the tour bus) , amidst the high energy musical numbers and wonderfully outlandish costumes, the musical also touches on some serious themes with many moments of pathos along the way.

The central three characters are perfectly cast, with the transsexual Bernadette (Mike Jenkinson Deakin), the cynical young Felicia (Jack Fletcher) and the estranged Tick (Josh Hankey) all displaying a great chemistry and command of the stage as they sing and dance together, with countless costume changes along the way.  Alongside the 3 Queens is a talented ensemble who perform as everything from cowboys, pink paintbrushes or giant cupcakes. The Three Divas who provide much of the vocal power on the night, memorably descend from the roof of the theatre, and their musical commentary is the sassy heartbeat of the show.

The classic songs, come in quick succession as we gradually learn more about the lives of the characters and their various personal sadness. Initially it appears that any darker elements of the musical are to be dissolved quickly by humour and the power of the music, however as incidents of homophobia rear their ugly head (including violence in the second half) the struggle of the characters for acceptance becomes evident.

The second half moves more swiftly along with some audience participation along the way and more colourful characters encountered by the lead trio, including a performer with some intimate ping pong ball skill. Events are tied up nicely  as the road trip reaches its end with a reunion and a new hopes for the characters. The closing scene complete with 2 encores and a standing ovation, features the entire cast dressed as various Australian animals and rocking out to “I will Survive” and others.  With song after memorable song, Priscilla succeeds in being a fun camp romp, but also one that makes you care for its characters. Everyone that came here tonight got the fun and laughter they were seeking and the audience response was joyous. It’s hard to fault a show that features a disco dancing priest singing along to “don’t leave me this way” whilst conducting a funeral.

With thanks to Tip Top productions. All pictures by Mark Carline.

One Reply to “Priscilla Queen of the Desert review”