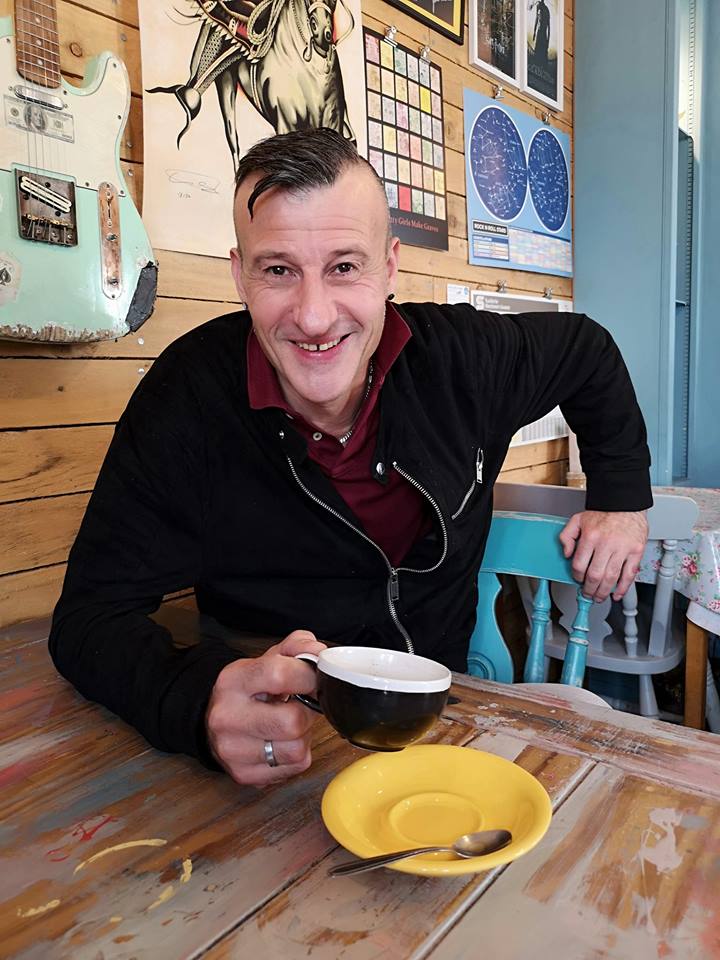 Gavin Matthews is one of Chester’s best known local personalities, both this for his regular programme on Chester’s Dee106.3 radio and his work broadcasting from events across the city.  4 years after Gavin interviewed me for his show we finally got round to reversing the roles and talking to the presenter about his career over 20 years in radio and his views about Chester.

Where did the Gavin Matthews story begin?

I was born in Essex and went to a comprehensive school. I used to spend a lot of time listening to the radio in bed at night on a little transistor radio, I got it for my 6th birthday. Musically I was into anything. My mum tuned it into Radio One and I was hooked from that day onwards. In between my studies and becoming a good scout, I did some hospital radio at the age of 15. I did that all through A levels and university. I was obsessed.

How did you get into working professionally ?

It took a while. I made a lot of demos, in those days you made them on cassette. You posted them out with a letter. I was doing that for a couple of years. Radio was an ambition, I didn’t know if it was going to be achievable or not, the back up plan was teaching. Thank goodness the radio thing came off!

I got a stack of letters back saying all the usual stuff saying “no vacancies”.  Then one day I got a letter from Marcher Sound saying they liked what they heard. It was a little chink of light. One day I decided to phone in sick on the office job, drove all the way to Wrexham, knocked at Marcher Sound and asked to see the Programme Controller. Of course the receptionist said he was busy and I said “its fine I’ll wait” . I waited and he called me in, we had a chat and within a couple of days he’d phoned me up and offered me 4 shifts. It got me in. From that I’ve gone from night time to part time to full time. That was 22 years ago!

How has the radio business changed over the years?

Massively. When I started every county and city had its own local radio station that broadcast from the area 24 hours a day. In the late 90s networking started creeping in as local broadcasting requirements were relaxed, initially by the radio authority and now OFCOM. With computerisation it became easily to record some stuff out of hours, to put the same programme on different stations with different idents and adverts. The effect is that there are less presenter jobs, now we’re in a very brand led world. There are 3-4 major radio players in the whole of the UK that own the majority of the stations. They’re very successful brands, Heart, Capital, Smooth and so on.. but it has reduced the true pure local radio. There are few local players left.

Your shows have always had a key focus on local affairs..

That’s our USP. If we weren’t doing that we might as well not be here. That’s the one thing that we can do that nobody else can do. Other players have other areas to focus on.

The station plays a role in events across Chester. The team are out with Chester the Cat regularly…

The Cat goes to nearly everything. more events than I go to! I think its important that we’re seen out and about, we take kids to school, we go to workplaces, we go to as many events as we can do.  Some of the big events are a lot of fun, you get quite a buzz from them. Some that we’ve always done, the Chester Christmas lights, the Hoole lights. Until this year we’ve always done the Lions Fireworks at the racecourse. We are one way of giving events publicity, but the whole point of local radio is to talk about things in the local area that people are talking about. Social media does that , if we don’t do that we become irrelevant.

When I worked at Marcher I covered Chester and Wrexham, I lived in Wrexham so was more likely to focus on the Wrexham side of things. When they opened a studio in Brannigan’s in the late 90s, I was in Chester every day. Unless you’re there you’re not really a part of what’s going on. When I started at Dee in 2005 I felt it was important to get to know as many people as possible, visit as many places as possible, so I could talk about it. Not in great detail, its not Radio 4 , its not a talk station, but a nod to what’s going on.

Its difficult to say.. I suppose in some ways its changed for the better. In other ways…. the thing is, nothing stays the same forever. A decision that looks bad now was probably taken in good faith. One of the big moans that I’ve seen was students taking over. 11 Tescos is it ? I  don’t know how many Costa coffees. But guess what, I was a student once, I shop at Tesco and I drink Costa Coffee. So these things are here because people want them.

Its great to see the resurgence of the market, which when I first came to Chester was bustling. It hit the doldrums but seems to be doing well now. Storyhouse is amazing, I’ve been there quite a few times in the last year and a half.. Everybody said the Odeon was closing was tragic, but hardly anyone went there, that’s why it closed. Its great, Storyhouse is a brilliant reinvention of the building, its heaving. If the Northgate development can finally happen, it will really compliment it and catapult Chester into the higher echelons of places to go in the UK. But no ones holding their breath!

What else do you think the city does well at ?

I think the city has done incredibly well in retaining a unique vibe in an increasingly brand led world. I know when you drive up Love street and wait at the lights and you see a lot of boarded up shops… go down the road to Wrexham and see how bad it is there. People can complain that Chester isn’t what it was, but things change. Its held onto a lot of its boutique shops, most units are open. There are plenty of places suffering where its a lot worse. The fact is its a tourist destination and its promoted fairly effectively. It does help that we have a lot of ghosts! Its good for business. Good old Sarah in Thorntons keep at it love!

Where do you think the future of radio lies ?

Its very difficult to predict. The future of commercial radio is going to be brands. In the 1980s it was the only way to get information. You would have a gardening phone in, a country music programme, a classical programme. People would phone up saying “I’ve got an old twin tub I’m selling for 25 pounds!” This happened. Theres no need for it anymore now there social media. Brands will be the future, people want to know what they’re going to get. Music is the main drive. If you’re all over the place, if you still had a jazz programme or a folk programme you would have had no listeners. If you want folk there are other places to go to now.  A local strand within this still has an important role to play for many people. You only have to look at Dee’s audience figures for that. We spend very little on marketing compared to our big rivals, yet nearly every survey that comes out . we are the commercial leader in our area.

How do you feel when you’re on air ?

I have no idea how many people are listening to me, it doesn’t enter my head. You don’t approach radio like you’re talking to a crowd at a light switch on. You try and think about one person and just have a chat really. You need to project your voice and you can’t think too long about what you’re gonna say because dead air is no good on the radio. The day of the DJ has long gone and good riddance! If you cant talk about something like you’re having a conversation in a pub then you shouldn’t be doing the job in my view.

Over the years are there any people you’ve met that stand out from the community?

You! You started with a little twitter account, and before you knew it you had more twitter followers than the radio station which had been going ten years longer! You were on the front pages of the local papers and you were a subject I wasn’t allowed to mention with Cllr Mike Jones when he joined me on the air!

I’ve met so many people who’ve done work for good causes. I’ve interviewed parents whose children are really ill, people who have done difficult things to raise money. People who just have a single minded vision, and they go for it. Adam with his Share Shop, Steve at the moment with his Super Trees. These people just keep gong until they get where they want to be. Theres been so many people like that over the years. Its all part of the patchwork quilt of talents; interest and passion that makes Chester what it is. So the streets are full of drunk Scousers on race days, in Liverpool the streets are full of drunk Scousers every weekend and they’re doing alright!

What events have you got  coming up ?

One Reply to “Gavin Matthews”