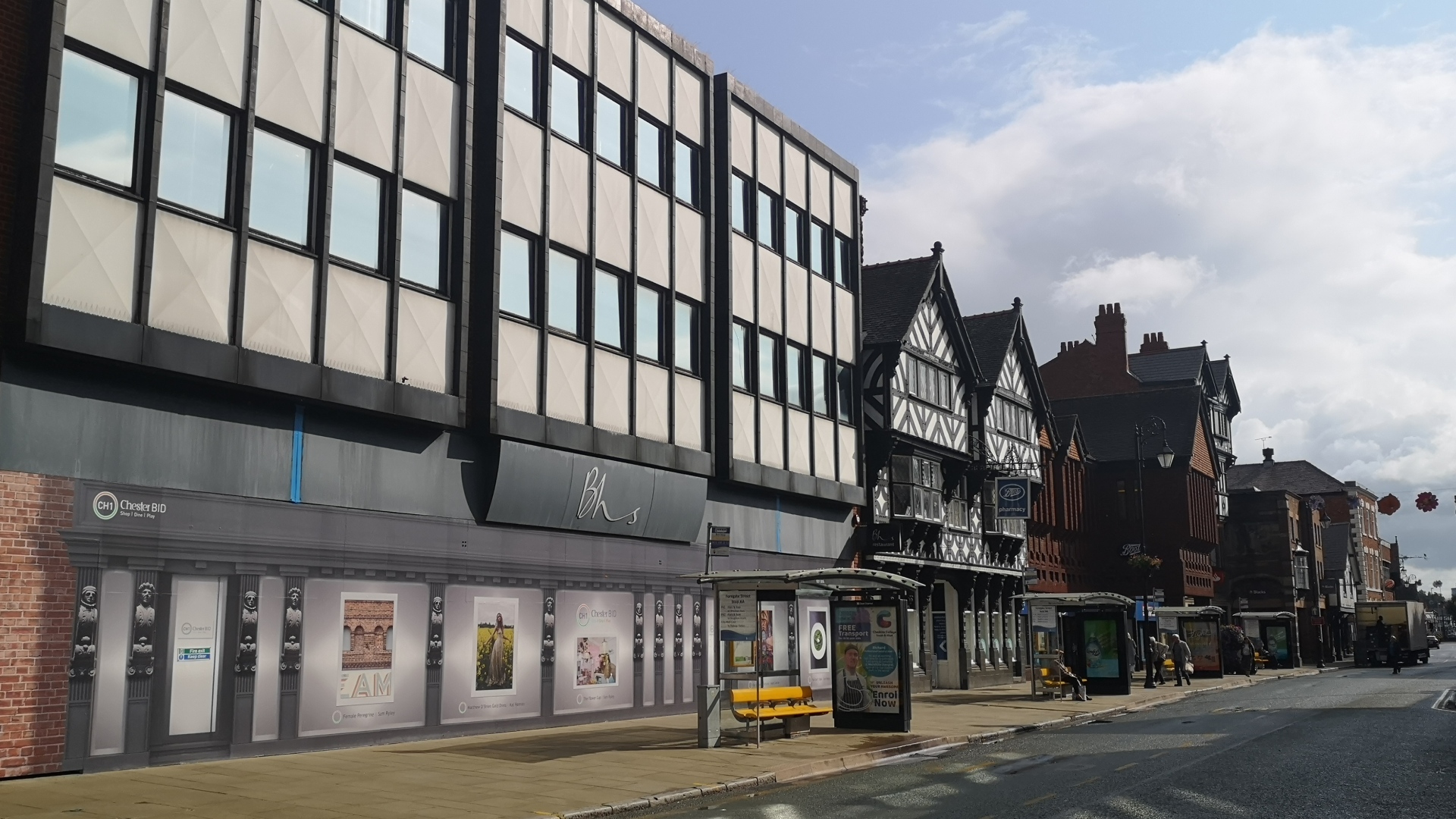 With Les’ Fish Bar joining the lonely legion of empty shop units across town, the facebook top commenters are crying the usual cry about the city being on its last legs. While we don’t subscribe to this blinkered view, no one can deny that from collapsed chains to short lived independents, boarded up cafes to decaying historical sites, Chester boasts an impressive amount of void to stare into. As the funeral bells toll in the distance here are a few of our favourite empty premises… and remember York and Shrewsbury have NO empty units, if you believe what they say on the internet…

In a prime location in front of  the Cathedral, a raft of closures last year have left  this part of town feeling particularly bleak. Halifax closed their branch here as part of a nationwide closure programme , the Bizarre gift shop is now gone and the other units further up have been empty for years.  The empty row resembles the notorious Henblas street in Wrexham, which until recently was a completely vacant ,ghost like street. And yet the stunning Cathedral looms over , parades pass through and the CheStar shines bright at Christmas. Contrast the streets around York Minister, with a chocolate shop and a bookshop and others, St Werburgh Row definitely needs some attention from the landlords and the council. 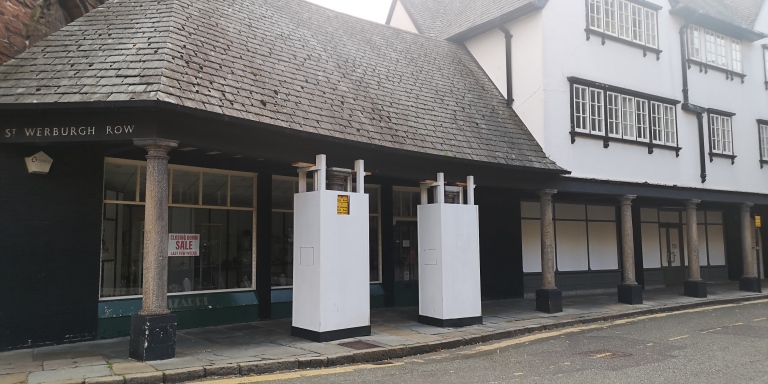 This huge empty unit formerly housed the city’s second branch of McDonalds which opened back in 1997. “It was always busy” but closed down in May 2018 following the never ending uncertainty surrounding the Northgate saga. Tacked onto the unpopular Forum building , and where the historic former market hall used to look out onto the square, McDonalds is now just a modern day Chester memory. The upstairs area offered a nice view of the town hall square and the restaurant is no doubt missed by many. After its closure the unit was hastily boarded up in preparation for a royal visit but now displays some attractive signage for the revived market. The entire area remains scheduled for demolition at some point, once we’ve decided what to build in its place in the second Northgate phase. 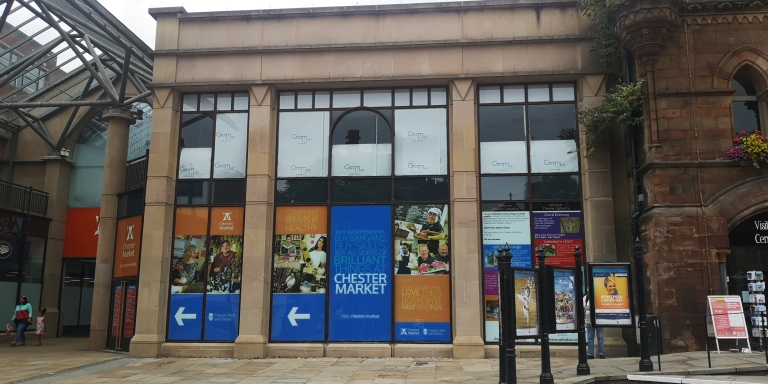 Another sparsely occupied part of the city, the area has been in the doldrums for years with the section from the junction with Northgate street being entirely empty . Lakeland plastics relocated years ago and the bar on the corner has been occupied by many businesses.  The Boot Inn still trades along with a few others along the far end of the row but the area feels grim and empty and a waste of a unique asset. The fact that the Rows Cafe with its pleasant seating area overlooking Eastgate street couldn’t survive says it all. The recently announced  heritage funding from the Government is welcomed and a wider strategy to make the most of the rows is needed.  Any tourists walking this row are going to be left disappointed. Residents might just shake their head at the futility of it all. 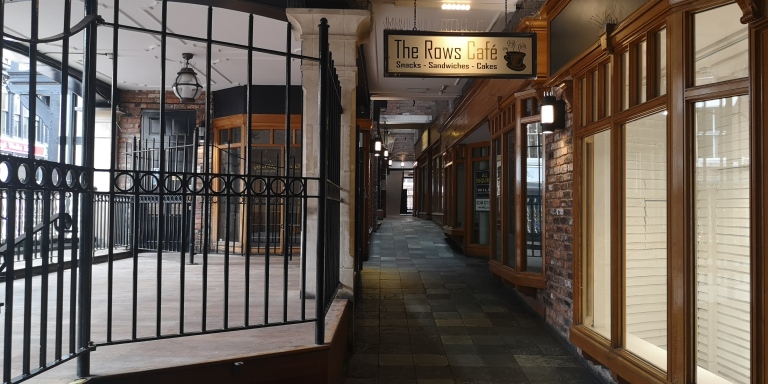 Opening in June 2018, the Chester branch of Whitmore and White closed 9 months later in March of 2019. The small unit which previously housed the also short lived Silver Star gallery, offered the kind of artisanal goods that you’d assume the independently minded Cestrian would have loved. Of course they didn’t, and the lack of sales meant the closure was inevitable. This unit epitomises the huge decline of traditional retail as well as the virtue signalling of those who say they want independent shops but instead drive off to Cheshire Oaks or Broughton, because its easier. “Chester’s foodies were getting a raw deal: now they’re not. The unique thing Whitmore & White offers to Chester is that all this fine food and drink is under one roof ” said manager Tom Scargill shortly after opening. A sad Chester tale! 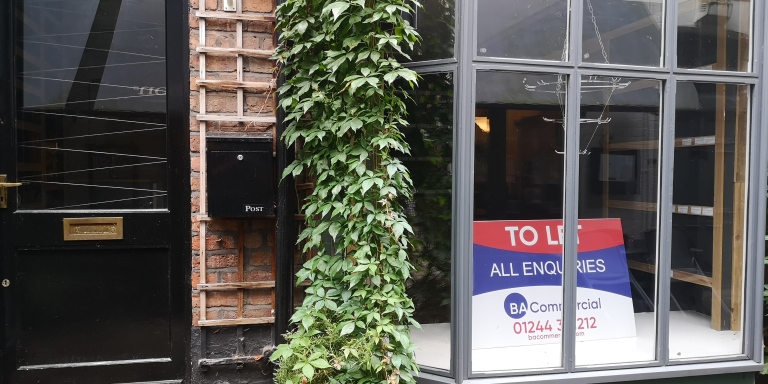 Retail giant BHS collapsed in 2016, with Chester’s branch closing in August of 2016. The mega sized unit has been empty ever since, with no indication it will be occupied an time soon.  The loss of BHS, which had a very popular cafe, as well as a Christmas shop which was always on the list for festive gift buying, left a gaping hole in Foregate street.  Some suggested moving the market there , the sky high rent and rates ended this fantasy, and no takers have come forward since. Given the terminal decline of city centre retail, splitting the unit seems like the only viable option. In the meantime the Ch1 BID recruited some local photographers in a collaboration that now shows the front of the unit covered in some attractive Chester branding.  Once again symptomatic of a much larger problem, as shopping habits evolve and shift, civic leaders must address what to do with large empty blocks like this one. 44% of ex BHS stores were still empty as of April of this year. Residential, gyms, community spaces, bowling alleys, or one big post apocalyptic laserquest ?? 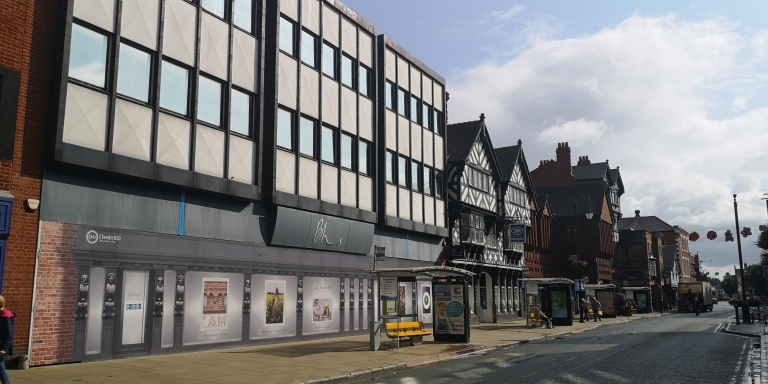