Like the Sunflowers that invaded Storyhouse’s foyer last night, and those that bedecked the stage, Gary Barlow and Tim Firth’s Calendar Girls The Musical successfully reaches both height and light. The award-winning production, featuring an expansive cast of well-known faces is based on the true story of the calendar girls – a group of ordinary ladies from the Women’s Institute who achieved something extraordinary. Adapted by Tim Firth into a script, with local(ish) lad Gary Barlow adding the music. 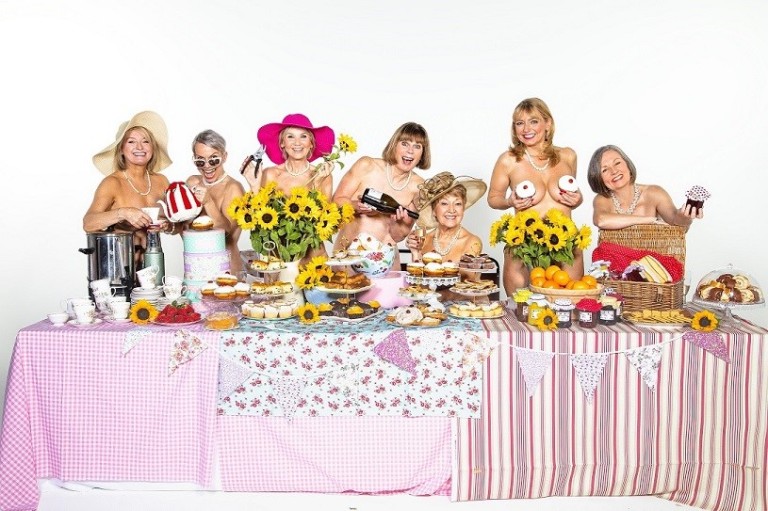 Walking into a packed Storyhouse and taking my seat, I could feel a warm sense of excitement and eagerness from the crowd. As the opening number unfolded – a very British, very Gary Barlow, ode to Yorkshire – I was star struck seeing such familiar faces right in front of me (Hi-Di-Hi star Ruth Madoc, Loose Woman Lisa Maxwell and Hollyoaks actress Sarah Jane Buckley to name a few). The story balances tragedy and comedy well; scenes of everyday life in the WI, and all the innuendo that comes with them are contrasted with the emotional punch of Angela and Clarkey’s journey through illness and love.

Director Mat Ryan expertly juggles a vast cast and almost endless musical numbers to great effect. During the first scene, the cast filled the stage and set the tone wonderfully for what was about to be an emotive and uplifting yet true to life show. Although hard to discern at first, the individual personalities of all of the girls were soon fully on show. Rebecca Storm in particular was excellent as Chris, belting out an emotional solo that really captured the essence of the show.

The musical was rife with northern charm throughout although the story was a sombre one at points, which showed the suffering of life and loss. The backdrop of the Yorkshire dales provided a unique way of exploring both the joy and pain to be witnessed on change, with seamless scene changes helping the shifts in atmosphere. The catchy songs and uplifting lyrics also found a way to make pain, positive. I even made a note to download the song ‘Sunflower’ – Chris’s excellent, emotional, and moving solo.

Although the emotions within were often raw, it was a great joy to see the story unfold and witness these Yorkshire flowers find their light. The sauciness, sadness and silliness all work nicely together – and there’s nothing like getting your kit off in front of an audience of Brits to invoke jubilation and roars from the crowd. It’s as British as a currant bun, or at least an M&S Victoria Sponge. Calendar Girls cannot fail to make even the most miserable person smile.

The show runs until Saturday!